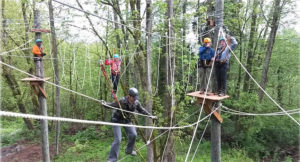 SEATTLE – A platform balances two feet above the ground on a central pivot point. How do you get a dozen people onto that platform without tilting it so far that it touches the ground?

SPOKANE, Wash. – Alyson Blum is breaking new ground as the first pharmacy resident in obstetrics at the College of Pharmacy.

SPOKANE, Wash. – Military nurse, healthcare lawyer and educator Chad Priest will give a free, public lecture on “Designing the Healthcare Provider of the Future” at 6 p.m. Monday, April 14, at the Bing Crosby Theater in Spokane. Doors open at 5:15 p.m.

By Abbi Delgado and Amanda Roberts, Office of International Programs

PULLMAN, Wash. – A number of Washington State University units have employees dispersed throughout campus – and on multiple campuses statewide – making it sometimes difficult to get to know co-workers.

The Office of International Programs (IP) recently spent a morning overcoming that distance via a teamwork building experience.

“The goal was to engage staff in a fun, challenging and interactive atmosphere,” said Erin-Kae Rice, special assistant to the IP vice provost and organizer of the retreat. “We have a big … END_OF_DOCUMENT_TOKEN_TO_BE_REPLACED

PULLMAN – You know those goody two-shoes who volunteer for every task and thanklessly take on the annoying details nobody else wants to deal with? That’s right: Other people really can’t stand them.

Four separate studies led by a WSU social psychologist have found that unselfish workers who are the first to throw their hat in the ring are also among those that coworkers most want to, in effect, vote off the island.

“It’s not hard to find examples, but we were the first to show this happens and to have explanations why,” said Craig Parks, lead … END_OF_DOCUMENT_TOKEN_TO_BE_REPLACED

Interactions between the principal scientists for WSU’s sleep research program. VCAPP is the department of Veterinary and Comparative Anatomy, Pharmacology and Physiology. (Diagram courtesy of James Krueger).

James Krueger talks teamwork like any other major league coach when he describes the faculty collaboration that forms the core of WSU’s highly successful sleep research program.

“The researchers on our team have a variety of expertise, and we weave that expertise together,” said Krueger, professor of neuroscience at the College of Veterinary Medicine (CVM). “This collaboration brings together the best from each … END_OF_DOCUMENT_TOKEN_TO_BE_REPLACED

A team of WSU researchers and their wine-industry collaborators are the winners of the 2007 Integrated Pest Management Team Award. The award is given each year to the team that successfully implements an IPM solution to an agricultural pest problem.

The vineyard solution saves growers about $5.5 million a year and has resulted in … END_OF_DOCUMENT_TOKEN_TO_BE_REPLACED

Rope challenge courses have been called one of the safest and most valuable learning tools in the adventure programming field. Today, rope courses are more than just ropes, and the adventure of using them has expanded to a broad range of educational, business, organizational, recreational and therapeutic organizations. This year the WSU Pullman campus added its own outdoor ropes challenge course, located behind the Student Recreation Center. With the course came a new program manager – Francis Morgan-Gallo.Among the skills that a challenge program can teach are risk-taking, teamwork and other group dynamics. It can help groups identify problems, weaknesses and strengths and map courses … END_OF_DOCUMENT_TOKEN_TO_BE_REPLACED