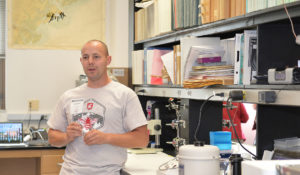 PULLMAN, Wash. – Going through customs can be frustrating for travelers. Imagine going through with a container of frozen bee sperm.

“It’s certainly a challenge,” said Brandon Hopkins, Washington State University entomology research associate and lab manager of the WSU Apiary Program. “Most customs agents aren’t used to seeing that, so it takes a lot of explaining.”

It’s complicated by the fact that WSU has the only permit issued by the U.S. Department of Agriculture (USDA) to import honey bee semen into the U.S.

Honey bees are not native to North or South America, and importing into the U.S. has been tightly restricted since the 1920s. As a result, U.S. honey bees have limited genetic diversity.

“We’re importing germplasm from Old World populations around Europe to increase genetic diversity here,” Hopkins said. “The goal is to improve commercial breeding for bees so they can better fight off diseases and parasites.

“Everything we do in this effort is to ensure bees survive to pollinate our food sources,” he said.

Hopkins and other WSU entomologists have collected genetic material in Italy, Slovenia, the Republic of Georgia and Kazakhstan since they received a USDA permit to import honey bee semen in 2008.

WSU scientists also transport fresh sperm, but its shelf life is only about two weeks. Hopkins developed a method for freezing the material as part of his master’s degree at Eastern Washington University, and he refined it further when he came to WSU to earn his Ph.D.

“Cryogenic freezing has been used to preserve germplasm from animals like cattle for decades,” he said. “I adapted it for honey bees. Right now we are the only repository for bee germplasm in the world.”

The importation process starts with a trip to collect material overseas. Once WSU scientists arrive in a country, they work with local beekeepers or government agencies equivalent to the USDA to visit a variety of hives.

They collect mature male bees, called drones, and then extract semen. Each male produces about one microliter. For comparison, a single drop of water is approximately 100 microliters.

“We try to collect hundreds of microliters of sperm every day we’re there, so those are long days,” Hopkins said.

The semen is frozen in the origin country because freezing fresh material yields the best results. A special substance is added to avoid damaging the cells during freezing. Once back at WSU, the samples are stored at -196°C (-320°F) in a tank of liquid nitrogen.

Theoretically, the sperm can stay viable at that temperature for 10,000 years or more, Hopkins said. It can then be thawed out and used to breed honey bees here.

Unfortunately, the breeding process is not as simple as inseminating one queen and then providing the second generation of bees to breeders. Second generation queens contain only 50 percent of the imported European DNA.

If those queens are released, the imported genes would quickly become diluted as they breed with U.S. bees. To prevent genetic dilution, Hopkins and WSU researchers inseminate second generation queens with imported material as well, ensuring that third generation bees have 75 percent imported DNA. Then that generation of bees is inseminated as well. The iterative process results in dozens of queens with more than 85 percent of imported genetic material.

These multiple rounds of insemination are where the frozen semen is most helpful.

“Without frozen semen, this process would require trips back to Europe every year or multiple times per year,” Hopkins said. “With frozen semen, we simply thaw the semen to use for each generation.”

The genetically diverse bees are provided to U.S. bee breeders to breed future generations that are adapted for certain geographic regions.

“We want to improve the genetic background of honey bees so they can fight off diseases and be more likely to survive in their climates,” Hopkins said.

Beyond increasing disease resistance, the cryogenic program has a conservation component. A few countries and regions are interested in preserving the genetic material of their distinct bee varieties.

“You can’t put a fence around bees,” Hopkins said. “So in Italy and France and other locations, they’re trying to conserve their unique subspecies. Freezing semen conserves those specific genetic lines or entire subspecies inexpensively for a long time.”

He said the WSU bee program has worked with researchers from around the world to create more honey bee genetic repositories like the one at WSU. With the potential of a new Honey Bee & Pollinator Research Facility established at WSU, Hopkins said the university will be able to do even more research to diversify the gene pool for U.S. honey bees.

“We’re still really early in studying this,” he said. “But we’re learning more every day, and that center will be a huge boost to our program and the body of knowledge about saving the honey bees here.”

To learn more and to donate to the WSU bee program, visit http://bees.wsu.edu/.