RICHLAND, Wash. – Washington State University Tri-Cities will dedicate its West Building in honor of late WSU President Elson S. Floyd during a ceremony at 10 a.m. Wednesday, May 3, outside the front entrance to the building.

RICHLAND, Wash. – A public luminaria lighting ceremony to honor the late President Elson S. Floyd and others affected by cancer will be hosted by students at Washington State University Tri-Cities 5:30-6:30 p.m. Wednesday, Oct. 14, on the Rotary Stage on campus. 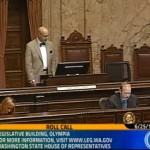 PULLMAN, Wash. — A Celebration of Life Ceremony honoring the life and legacy of former Washington State University President Glenn Terrell was held Thursday in the Terrell Library Atrium on the WSU Pullman campus. Dr. Terrell, who served as president from 1967 to 1985, died Friday, Aug. 30, at the age of 93.

Commencement season offers the university a welcome opportunity to celebrate and shift the focus to shared accomplishments and the difference that our university makes in so many people’s lives, notes President Elson S. Floyd in his latest Perspectives column….

According to the Office of  Institutional Research, by the end of this academic year, WSU will have awarded more than 209,000 degrees since our first graduates received theirs in 1897.

PULLMAN — WSU President Elson S. Floyd and Provost and Executive Vice President Warwick M. Bayly have formed a university budget committee to assist in the fact-finding and decision-making regarding the budget reductions facing the university for this fiscal year and the upcoming biennium.

“This committee is representative of our university community while remaining adequately small and nimble to quickly and decisively respond to the budget opportunities and challenges that await us in the coming months,” Bayly said.

He said the committee will be asked to: