PULLMAN, Wash. – Can’t swing a plane ticket to PyeongChang on short notice? You might still be able to participate in the 2018 Olympics, virtually anyway. Immersive VR technology developed at WSU, and being used at this year’s winter Olympics, is set for a series of public demonstrations on the Pullman campus.

As professors at WSU from 1993 to 2015, Sankar and Uma Jayaram researched and developed virtual reality technology. With years of funding support from federal agencies, such as the National Science Foundation, NASA, and the Defense Advanced Research Projects Agency, as well as from private companies, such as PACCAR and Komatsu, Ltd., the couple started WSU’s Virtual Reality and Computer Integrated Manufacturing Lab (VRCIM) and made seminal contributions in virtual reality applications in engineering design and manufacturing.

Sankar Jayaram, a highly enthusiastic Cougar and Seattle Seahawks football fan, was inspired to begin creating immersive virtual reality stadium experiences when he wanted to but was unable to attend a Seattle football game. He decided to use his virtual reality expertise to figure out a way to feel like he was there.

The researchers went on to develop their pioneering technology and to start their company, 3D-4U, hiring many WSU graduates who had been trained in the VRCIM. The technology was used for the first in Martin Stadium, capturing multiple live 180- to 360-degree fields of view and enabling each viewer to determine a personalized view in real time or as a replay. 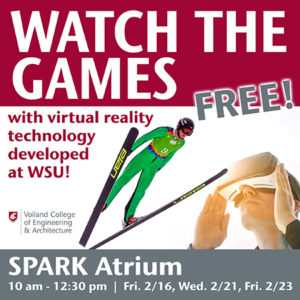 It was the development of quality headsets, particularly, that made the Jayarams’ vision for a fully immersive experience a reality. The researchers had proceeded with the development of their technologies despite hardware and bandwidth limitations at the time, confident that groups in different parts of the world would develop matching and synergistic technologies. They rightly anticipated that goggle technologies would catch up to their media technology. Once it did, they were able to easily match their existing technology with the new headsets, leading to a fully immersive, interactive, and individualized experience in setting such as concerts and large sporting events.

The Jayarams’ company was purchased by Intel in 2016, which is now providing the virtual reality experiences for the Olympics.

On April 5, the Jayarams will return to the WSU campus to recount their story as part of the Voiland College of Engineering and Architecture’s Lanning Lecture.