The Washington Stormwater Center joined with communities around Puget Sound to get volunteers to keep stormwater drains clear of pollutants and debris. The Adopt-A-Drain program, launched a year ago Saturday, already has nearly 1,500 drains adopted.

However, Seattle itself has around 20,000 adoptable storm drains that send stormwater directly into rivers, lakes, creeks, even Puget Sound. More participants are needed for the program to reduce pollutants flowing into natural waterways around the sound and elsewhere across the state.

“Whatever we can prevent from flowing into storm drains, that’s material we’re keeping out of waterways,” said Ani Jayakaran, a professor at Washington State University and faculty affiliate at the stormwater center, which is administered by WSU. “We don’t know the full extent of the damage coming from roadways and stormwater debris, but we’re starting to figure out what some of the impacts are.”

Adopting a drain is easy: participants can simply visit the programs’ web site to find a drain near their home. Click on a drain or two nearby, then enroll in the program. The site asks for 15 minutes twice a month to clean around drains, and to report time spent cleaning and what was removed. That debris is tracked on the site to show the overall impact of the program.

Adopters in Seattle receive a welcome kit that includes free tools for easier clean-up. Other cities offer their own kits to help people get started and remain invested in their drains. And all adopters can name their drains, leading to labels like Drainy McDrainface, Hermione-Drainger, and Purple Drain.

One major impact storm drains have on the environment is chemicals from tire debris causing coho salmon die-off.

“People keeping drains clear and removing chemicals that are so toxic to fish populations could have a major impact,” Jayakaran said. “There is so much plastic in our lives, and it can move easily into drains and waterways.”

Stormwater drains are a direct connection from roads and streets into streams, rivers, and other waterways. Plastic bottles, tire bits, and other debris washed into a drain could eventually wind up in the nearest natural water source.

To reduce pollutants flowing into natural waterways, 12 municipalities in Washington banded together to implement the Adopt-A-Drain program, which started on October 1, 2021.

“We’re really proud of the growth we’ve experienced with this program in its first year,” said Susan Harper, a public engagement specialist for stormwater education with the City of Seattle. “And we’re looking forward to adding more and more people as we expand further.”

Residents in each city can sign up to adopt a drain near their house, sweeping up the area around them and removing debris and litter.

“We ask adopters to look at and clean up around their drains once or twice a month depending on the amount of debris that collects around the drain,” said Harper, who brought Adopt-A-Drain to the region after talking with colleagues in Minnesota who are part of the program. “If you sweep up before a summer rain, or rake leaves around the drains in the fall, it helps keep the drains clear and reduces pollutants going into streams or even Puget Sound.”

Any city or town in Washington can enroll in the Adopt-A-Drain program; two more officially joined in August and September. The current cities are:

“Many people don’t know how much pollution goes down storm drains, or where that water goes,” said Harper, who has adopted two drains near her home. “It’s not just Seattle that’s impacted by pollutants going into waterways. That’s why we’re working together with other cities to make sure we have a regional impact on helping our waterways.” 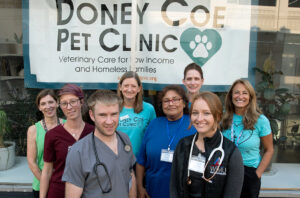