Members of Washington State University’s Ukrainian community are hosting a series of cultural events while raising funds and supplies for the defense of their homeland.

The network of Ukrainian faculty, staff members, and students coalesced this spring to provide personal support and champion awareness of Ukraine’s struggle.

Their first event, a Ukrainian Cinema Night and fundraiser for the nonprofit Nova Ukraine, is Saturday, April 16, at the Kenworthy Theater in Moscow, Idaho.

“I want people to see what we’re fighting for,” said Anna Stowe, a research associate in the Department of Crop and Soil Sciences who moved to the U.S. from Ukraine 12 years ago. Stowe chose two films, “Man with a Camera,” and “Shadows of Forgotten Ancestors,” that exemplify Ukraine’s heritage and way of life.

“Our culture is bright and colorful, and deserves to live,” she said.

“The soul of the Ukrainian nation is kindness,” said Taras Nazarov, a postdoctoral researcher in WSU’s Institute of Biological Chemistry. “We grow wheat, sunflowers, and give food to the world. We produce knowledge and technology, and are passionate about our culture. But now we need a sword in our hand. Otherwise, our country will disappear.”

While Stowe’s family lives in the relatively peaceful west of Ukraine, the families of Nazarov and Andrei Smertenko, a fellow IBC scientist and associate professor, live in Kyiv, close to the former front line.

“Luckily, my parents are alive,” Nazarov said. “For a while, I would talk to them and think, ‘that’s the last time I’ll ever see or hear them.’”

A reserve officer in the Ukrainian army, Nazarov balances their WSU research job, studying molecular mechanisms for more productive wheat, with volunteer outreach securing medical and military supplies such as bandages, tourniquets, and first-aid tools for defenders back home, and organizing combat casualty medical care classes in Ukraine and internationally.

By gathering on the Palouse, Stowe hopes to prevent neighbors from becoming complacent about the war.

“If we keep it in public view, we can stop it faster,” she said.

Additional events are planned, including an April 29 music performance in Pullman and an art exhibit on the WSU campus.

“We want to share with our community who we are,” Stowe said. “We have our cuisine, our language, our stories, music, cinema. You can’t tell us we’re not a nation.”

“We’re an independent country,” Smertenko said. “We are strong, and our fight for freedom is worth supporting.”

Ukrainian Cinema Night is Saturday, April 16, at the Kenworthy Theater, Moscow, Idaho. Admission is free, donations are accepted. “Man with a Camera” is 6 p.m., “Shadows of Forgotten Ancestors” is 7:30 p.m. 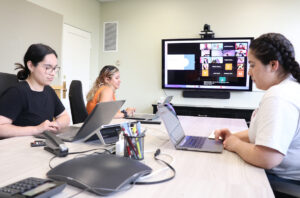