Lt. Eric Hedeen was returning to his base in Diego Garcia, an island in the Indian Ocean, during Operation Desert Storm in 1991.

An alumnus of Washington State University’s School of Design and Construction, he was serving as an electronic warfare officer in the U.S. Air Force during the first Gulf War.

Suddenly, the B-52 aircraft that he was flying in began developing electrical and mechanical problems. As the engines failed at 2,000 feet, the crew members ejected.

While three of his crewmates managed to eject safely, Hedeen was one of three who tragically died in the accident.

Nearly 30 years later, a team of WSU students is designing a memorial to honor the three fallen soldiers. The monument will be located near the former Eaker Air Force Base, now Arkansas Aeroplex, in Blytheville, Arkansas.

The students, part of WSU’s chapter of the American Institute of Architecture Students, began work on the project last summer after being approached by Allan Hagelthorn, Hedeen’s commanding officer at the time of the accident. Hagelthorn learned that Hedeen had studied architecture at WSU and approached the school to see if they could help with a memorial design. 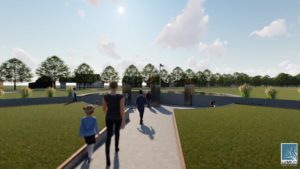 The students’ final work includes three brick pillars, each symbolizing one of the fallen veterans, with one standing on land and two of them rising up from a pool, reflecting the fact that two bodies are still at sea. The ramps approaching the pillars together form the shape of a B-52 wing.

The team designed the elements of the site on different elevations, starting on flat ground and slowly sloping down to where the water meets the pillars. 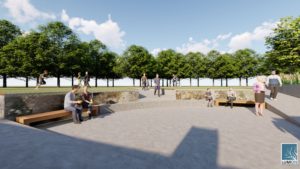 “We wanted to make visiting the memorial an experience of reflection and concentration,” Nelson said.

“This wasn’t just another design project for us,” he added. “Everyone in the team felt an emotional charge working on this.”

In almost every meeting, someone on the team brought up how proud and happy they were to be working on the project.

“We felt proud and honored to be able to represent the story of these heroes,” Ismail said.

“The construction of the new memorial recognizes the burden of their loss and provides a place for reflection and remembrance of them,” said Andy Canfield, an Arkansas historian who came up with the idea for the memorial. “It will also ensure that future generations will learn of their sacrifice and what they gave of themselves for their country in defense of freedom.”

This project has touched a lot of people – including Hedeen’s family who live near Wenatchee – and other air force veterans, Hagelthorn said.

The design also made a powerful impression on Steven Jones-Ellard, Hedeen’s crew-mate and a survivor of the crash. He was friends with Hedeen for three years and was sitting inches away from him when they ejected from the airplane.

The project’s design takes him back to the days when the crew trained and hung out together.

“When I look at it I feel like we’re all in the same place one more time,” he said.  “They came up with an astounding design, and it beautifully symbolizes the story and the sacrifice of my crew-mates.”

Hagelthorn is working to finalize the project and to raise funds for its completion.