PULLMAN, Wash. – People tend to listen to big talkers, whether they are women or men.  Still, more women prefer not to use assertive language, according to a new study led by Washington State University economist Shanthi Manian.

The study, published in Management Science on Feb. 17, found that participants in an experiment more often followed advice when the people giving the advice used assertive “cheap talk,” statements that cannot be verified as true. Examples of such statements are often found in job seeking cover letters, such as “I have extremely strong problem-solving skills.”

The experiment participants followed the advice people gave at similar rates regardless of their gender—even though they thought other people would be less likely to follow the advice of the female leaders.

“It was surprising. We didn’t see actual discrimination: the subjects themselves seemed to respond about the same to men and women,” said Manian. “Yet, after the experiment was over, and we asked the participants what they thought we’d find, many of them expected discrimination.”

For the experiment, Manian and Ketki Sheth, an economist at University of California, Merced, recruited about 1,000 people to play a difficult online game. The players were paired with either a male or female leader, who gave advice online on how to play the game to earn the biggest reward.

Everyone had the same interactions with their leaders, except for two features—the gender of the leader and the assertiveness of the leaders’ language. The same advice was couched in language that ranged from less assertive, using statements such as “You probably have better problem-solving skills than I do, but here is what I am thinking,” to more assertive, such as “If you listen to my advice, I can assure you that my skills and experiences will help you perform well in this game.”

The game was played by about 1,000 people, roughly half were U.C. Merced students and half recruited through Amazon’s Mechanical Turk online crowdsourcing portal.

While all the leaders gave the same good advice, the more assertive the leader’s statements were, the more people were likely to follow the advice.

However, the researchers found that the participants did not discriminate by gender regardless of the language being used by the leader. The people paired with a female leader who used assertive cheap talk were just as likely to follow the advice as those paired with a male leader using the same language – even though most participants characterized such language as being more masculine.

Also, while previous research has found that when people violate gender norms, they may get punished or face backlash, in this experiment, the participants were just as likely to listen to the female leaders and found them no less likeable.

After the game was played, the researchers asked the participants whether they thought the leaders’ gender would matter. People were much more likely to believe that others would follow the advice from a male leader than a female leader, even if the advice was identical.

Sheth said the results raise questions about why women prefer less assertive language and what price they may pay for that aversion. 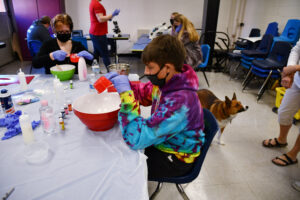