PULLMAN, Wash. – “Encounters with the People: Written and Oral Accounts of Nez Perce Life to 1858,” published by Washington State University Press, has won an Idaho Book of the Year honorable mention from the Idaho Library Association. 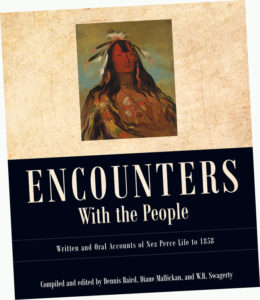 The annotated anthology of unique primary sources related to Nez Perce history was edited by Dennis Baird, Diane Mallickan and William R. Swagerty. Most of the material is published for the first time or is found in obscure sources. In addition, generous tribal elders contributed their collective memory of carefully guarded stories passed down through multiple generations.

Baird is a professor emeritus at the University of Idaho; Mallickan is Nez Perce and Shoshone Paiute, a historian and former park ranger; and Swagerty is director of the John Muir Center at University of the Pacific and a contributor to the Smithsonian’s Handbook of North American Indians.

The editors deliberately avoided drawing cultural conclusions, aiming to produce a volume that will have long-term worth for the Nez Perce and offer a solid starting point for scholarly, culturally informed, modern histories of the people.

The oversized hardbound book is 544 pages and retails for $50. Part of the Voices from Nez Perce Country series, it is available through bookstores nationwide or from WSU Press at 800-354-7360 or http://wsupress.wsu.edu.