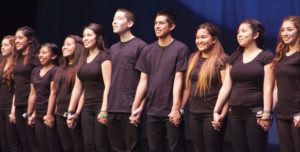 PULLMAN, Wash. – High school students from central Washington will present “Las Memorias,” a free evening of original theater based on their life experiences, at 7:30 p.m. Aug. 17, 18 and 19 in Daggy Hall’s Jones Theatre at Washington State University.

Each spring teens from central Washington school districts are invited to participate in Performance as Education (http://performance.wsu.edu/), a unique summer leadership program at WSU that combines writing, performance and theater to enrich students’ educational experience.

The program focuses on building skills that help students prepare for college, including writing, public speaking, working in teams and setting priorities.

The students’ work culminates in “Las Memorias,” a professionally produced play based on their lives. Though the title does not change, each year’s performance is different, featuring new students with new stories to tell.

“The main goal of the workshop is to start building our ensemble and to lay the groundwork for the theater skills that will be needed in August,” said Trotter.

“We focus largely on what it means to be a leader as well as the importance of sharing our stories,” said Trotter. “We use this time to help the students pinpoint who they are and what they want to say to an audience.”

The students return to WSU Aug. 8 to begin daily rehearsals leading up to the public performances. They work with a script crafted by Gonzales based on the students’ personal essays and with Trotter as director.

“This year’s students are highly motivated and excited to be a part of the program,” said Trotter. “They are looking forward to pushing themselves outside of their comfort zone. … I am confident that we’re going to have a great show!”

The students’ August residency at WSU also provides opportunities to meet with various university groups and learn about the admissions process.

In addition, WSU’s Critical Literacies Achievement and Success Program (CLASP), which assists first-generation, multicultural, low-income and other underrepresented college students in navigating their higher education experiences, partners with Performance as Education to help the high school students works on essays and build confidence in writing.

For many “Las Memorias” performers, the Performance as Education program gives them their first taste of life on a college campus, from attending the all-campus picnic that kicks off WSU’s academic year to learning from university faculty and working individually and with their peers to achieve goals.

“The most valuable thing I have seen is that, by the time the students leave here in August, they see college as a reachable dream,” said Trotter, who is in her fourth year with the program.

“Las Memorias 2016” is presented by the WSU College of Arts and Sciences (http://cas.wsu.edu/) in collaboration with WSU Performing Arts (http://performingarts.wsu.edu/) and is made possible by the sponsorship of Bob and Karen Felton. The Performance as Education program was established in 2008 by John Fraire, then WSU vice president for student affairs.

Parking for all three performances will be available without permits or fees in the Green 2 lot directly across the street from Daggy Hall.