LINCOLN, Neb. – Paul Johnsgard, an ornithologist, artist and emeritus professor at the University of Nebraska, was honored July 12 with the Washington State University Alumni Association Alumni Achievement Award in recognition of writing and teaching that has expanded public understanding of natural history, conservation and pressing environmental issues.

Johnsgard studied waterfowl ecology and earned a master’s of science degree in wildlife management from WSU in 1955. He received a Ph.D. from Cornell University. He has been a professor for more than 50 years at Nebraska, where he is a foundation regents professor emeritus. 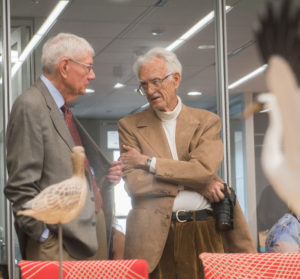 He has authored more than 100 papers/articles and 50 books, mostly on the comparative biology of several major bird groups of the world. But with publication of “Song of the North: A Story of the Snow Goose” in 1974, he began to write in a literary style that made his books more accessible to a broader audience outside academia.

His bestseller, “Dragons and Unicorns,” was co-authored with his daughter. Published in 1982, it is still in print and has sold over 50,000 copies.

In addition, nearly all of Johnsgard’s books have been illustrated by him with either line drawings or photographs.

He has won the National Wildlife Federation’s National Conservation Achievement Award in science and the Wildlife Society’s annual award for outstanding wildlife biology writing. He was elected a fellow of the American Ornithologists’ Union in 1961, was a Guggenheim Fellow and earned fellowships from the National Science Foundation and the U.S. Public Health Service.

In retirement, Johnsgard has been curator of several exhibits about birds, the Lewis and Clark expedition, Charles Darwin and other topics.

Read a 2006 article about Johnsgard in WSU’s Washington State Magazine at http://wsm.wsu.edu/s/index.php?id=668.

The WSUAA Alumni Achievement Award was created in 1970 by the WSUAA Board of Directors to recognize alumni who have given outstanding service to WSU and made contributions to their professions and communities. The award is the highest honor bestowed by the association. Of an estimated 250,000 students who have attended WSU, Johnsgard is the 526th Alumni Achievement Award recipient.