Clarke received the award, one of the highest honors given by the SOT, for his significant contributions in research, service, and education to the field of toxicology over the course of his career.

Clarke’s research focuses on the toxic effects of environmental pollutants on human health. He has conducted numerous studies on the effects of environmental toxins that have implications for liver disease, prostate cancer, and other chronic diseases. His substantial body of work includes studying algae blooms and their impact on the liver, natural product-drug interactions through the liver, and effects of the western diet on drug metabolism. His research has helped to inform policies and regulations on these substances and made a direct impact on the health and well-being of people around the world.

In addition to his research, Clarke has also made significant contributions to the field of toxicology through teaching and mentorship. His guidance has helped shape high school, undergraduate, and graduate-level students into the next generation of toxicologists.

The Society of Toxicology is a professional and scholarly organization dedicated to the understanding of the adverse effects of chemicals and other agents on living organisms. The work of Clarke and other SOT members plays a critical role in informing steps taken by policymakers and health officials to minimize exposure to different toxic substances and protect human health. 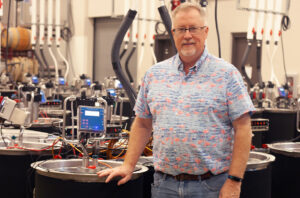 The Department of Viticulture & Enology assistant professor was recognized with the award for his research on grape smoke exposure mitigation.