Ranger Challenge acts as the varsity sport of the U.S. Army’s reserve officer training corps program. Each team consists of nine cadets who are tested individually and as a team in various challenges. These events range from physical fitness exams to simulated operations not unlike those that they will undertake as officers once they complete the ROTC program.

With their strong placement, members of the Cougar Battalion team will go on to present WSU at the 8th Brigade Ranger Challenge competition January 26-29 at Joint Base Lewis-McChord. At that event, Cougs will be competing against five other teams, including Gonzaga, which won the Task Force East regional competition.

The top two teams from that event will then go on to the U.S. Army Cadet Command Ranger Challenge final.

“The Palouse threw everything it had to offer weather wise to the 10 teams competing with conditions ranging from snow, hail, high winds and freezing rain during the 36 hour competition,” Lieutenant Colonel Matthew Sheftic, who oversees the U.S. Army ROTC program at WSU, said.  “It was inspiring to see our Cougar Battalion team rise to the occasion through mental toughness, resilience and teamwork to place in the top two teams coming out of TF East to advance to the next round.”

Teams from across the western United States found the track next to Martin Stadium covered in heavy snow Friday morning ahead of the fitness test portion of the regional event. Things only got worse from there, as the falling wintry mix shifted to heavy wind-driven rain.

In spite of the weather, teams took to their tasks, shouting encouragement as their fellow cadets did as many deadlifts, pushups and sprints as possible. Other events saw cadets hurdling heavy medicine balls upwards of 10 meters and running across the frozen fields with kettle bells in each hand.

Members of the WSU team kept a sunny disposition, saying that the conditions on the ground were “too easy.”

“Obviously these detriments affected every other team, so no one was at an unfair advantage,” team captain Evan Smith said.

After the morning’s field events, teams donned their backpacks weighing between 35 and 40 pounds and gathered at the Cougar statue. Each five minute interval saw a team line up and begin the arduous 15-mile Road March through the University of Idaho’s campus and onto the next phase of the competition. The rest of the weekend saw teams competing in various military skills competitions and weapons familiarization events at Camp Grizzly. 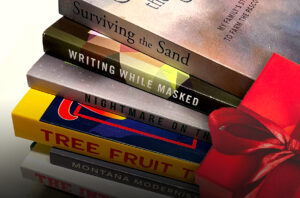