Nitivia Jones served in the Peace Corps in the country of Georgia, worked for a nonprofit in Guatemala, and taught English in Turkey but found herself struggling to understand the culture at her new job in Pullman.

She gained the support she needed by enrolling as a mentee in WSU Staff Mentoring Program. Jones, an international student advisor, was paired with Matthew Jeffries, currently director of campus climate and community building, who has ten years of experience at the university.

“I went through a bit of a rough adjustment period in my position, and Matthew was able to just listen and give me some guidance, some history about WSU, and a sense of how things work here,” Jones said. “He was very supportive, and it was really helpful.”

Jeffries has worked in several different units at WSU and could give Jones a broader perspective of the university. In turn, he enjoyed hearing about Jones’ time living overseas as that is something he has always wanted to do. The pair enjoyed talking with each other so much that they have continued to meet even after the formal one-year mentorship period ended.

“I had a great mentor once, and I really wanted to pay it forward,” Jeffries said.  “Some might think that mentor/mentee relationships have a power dynamic, but I think that it’s more of a symbiotic relationship—we learn from each other.”

The program not only helped Jones adjust to WSU but also may lead to collaboration between international programs and Jeffries’ work in building the campus community.

For more information and to apply, visit: hrs.wsu.edu/employees/staff-mentoring

This is exactly the kind of result organizers are hoping to see from a mentorship program with benefits for the participants and for WSU, said Theresa Elliot-Cheslek, WSU’s chief human resource officer.

“We try to expose both the mentor and mentee to somebody else within the university versus someone within their chain of command or organization,” she said. “We’ve found that really helps everyone realize how diverse WSU is in terms of culture, experiences, and knowledge throughout the system.”

The mentorship program began in 2019 as an idea proposed by WSU’s Commission on the Status of Women. To date, nearly 100 people have participated in pilot versions of the program administered by Human Resource Services, and feedback from participants has been very positive, said Elliot-Cheslek. This academic year, the mentoring program will be a combination of virtual and in-person.

While the program is popular, the number of participants is limited. Elliot-Cheslek hopes to grow the program in the future when budget allows the department to hire a full-time position to oversee the staff mentoring program and provide professional development opportunities. 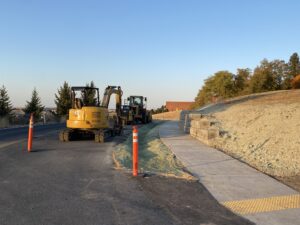