The guest speaker in Cheyenne Newsome’s pharmacy class confesses he hates Brussel sprouts. He loves his daughter. He is also transgender. He does not like public speaking but feels compelled to speak to the class in honor of his transgender friend who had little support and died by suicide.

Unfortunately, this is not an unusual story. An estimated 40% of transgender and non-binary people attempt suicide, compared to 4.6% of the general public. While there is strong evidence that gender-affirming care can help resolve gender dysphoria and improve quality of life, less than half of pharmacy schools report having education on the issue, according to a national survey conducted by Newsome.

That’s one reason Newsome, a clinical assistant professor in the College of Pharmacy and Pharmaceutical Sciences, wants to make sure WSU pharmacy students have a chance to hear directly from transgender people.

“When I first got exposed to a transgender person at a clinic, I had nothing up to that point in my education about this community,” said Newsome. “I just met these patients who had no access to care. They couldn’t find a willing provider or one who felt able and competent to give them care. Then, I heard stories of intentional harassment and mistreatment these patients had experienced from the medical community. I also recognized my lack of knowledge was probably not unique.”

Transgender and non-binary people make up an estimated 0.6% of the U.S. population – about 1.4 million people, but that number is expected to grow as more people, especially young adults, become more open about their gender identity. This increases the likelihood pharmacists and other health care providers will encounter trans and non-binary people in their careers.

Since arriving at WSU, Newsome helped institute training on transgender care for future pharmacists. She has taken the issue nationally with not just a survey of other pharmacy schools but with a recent commentary outlining strategies to include transgender care in pharmacy education. She has also been invited to guest lecture on transgender care at other universities in Boston, Chicago and Richmond, Virginia.

At WSU, colleagues from pharmacy, medicine, and other units have reached out to Newsome to learn how to incorporate transgender issues into their curriculum. Newsome also praised the work of WSU President Kirk Schulz’s Commission for Gender Identity/Expression and Sexual Orientation for helping encouraging greater inclusivity.

“The WSU community has been incredibly supportive,” she said. “I’ve been so proud of my colleagues, and our work at WSU where this is really embraced and encouraged by the leadership from the president on downward. It’s been fantastic.”

At WSU College of Pharmacy and Pharmaceutical Sciences, transgender care education involves three hours in a class on special populations. This includes interactive discussions on terminology and cultural competency as well as medications such as hormone therapy specific to this community. Then, she invites a guest speaker from the community – and from the class reviews, that is the portion the students find particularly compelling.

“They start to realize the impact they can make by helping trans people,” she said. “A gender-affirming provider can make a difference.”

“It starts with just recognizing when you’re automatically making an assumption, such as assigning a pronoun to someone, but it applies to many different aspects of care,” Newsome said. “You want to make sure you’re really getting the story from the patient, asking them open ended questions so you can really hear what their experiences have been, rather than assuming they’re like other patients that you’ve seen.”

In the future, Newsome would like to see transgender care woven throughout the pharmacy curriculum as it will help caregivers treat the whole person rather than focusing just on hormone therapy. WSU College of Pharmacy and Pharmaceutical Sciences has begun to make this change including transgender care in multiple courses to give students repeated exposure to the care for transgender patients throughout the curriculum. Newsome suggested that pharmacy programs could include patients in those case-based learning with conditions like hypertension or diabetes who also happen to be transgender.

Newsome would also like to see more pharmacy schools adopt training for this community. There has been some movement: the American College of Clinical Pharmacy now includes gender affirming hormone therapy in their toolkit identifying important therapeutic topics in pharmacy education, but it is included as Tier 3, meaning it is optional but not necessary to include in the curriculum. Newsome would like to see that change.

“If there is a community that we need to reach out to and make sure doesn’t have extra harm or extra barriers, it’s the transgender and non-binary community,” she said. 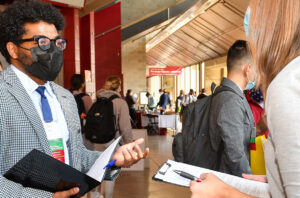