On a basketball court typically teeming with students, members of the Washington National Guard spend their morning setting up a COVID‑19 testing site.

While the mobile site has moved throughout Pullman since debuting in early September, its mission has remained constant: to assist the WSU community as it grapples with the unprecedented challenges of the ongoing pandemic.

“The experience has been extremely rewarding,” said U.S. Air Force Technical Sergeant Angela Brown. “You can see the appreciation and thankfulness in the faces of those who come for testing and hear it when they say thank you.”

Brown is a Coug who graduated from the College of Nursing on the WSU Health Sciences Spokane campus in 2018. So too is the site’s officer in command, Lt. Darcy Ailles. He graduated from WSU Pullman in 2019, and was given the opportunity to return home by his commanding officer.

“Having been a Pullman resident the last six years, I wanted to come back and help those who helped me,” Aillies said.

The National Guard site recently surpassed 2,500 testing swabs collected from WSU students, faculty and staff. In a typical day, the number of tests administered can range from 30 to 90. In prior postings, the Guardsmen who currently serve in Pullman administered as many as 400 tests in a day.

The Washington National Guard originally was scheduled to leave Pullman on Nov. 20, but at the request of the university, has opted to extend its testing operations through Dec. 17. The unit’s experience and readiness, particularly during the initial weeks of the COVID‑19 outbreak in Pullman at the beginning of the academic year, proved invaluable as WSU scrambled to adjust to the unexpected number of students who had returned to Pullman despite the transition to a predominantly distance education delivery model for the fall semester.

“We are indebted to the men and women of the Washington National Guard for their willingness to lend a hand to our community amid the ongoing COVID‑19 pandemic,” WSU President Kirk Schulz said. “They are putting themselves at risk doing this important work in an efficient way that works to ensure the continued health of our community.”

When the Washington National Guard was activated, it was considered an involuntary action, meaning all‑hands on deck. But since Aug. 24, it’s been an all‑volunteer force of National Guardsmen in Pullman.

“They are here because they want to continue to help,” Ailles said.

Washington National Guard Specialist Trevor Ford has been in Pullman since the beginning of the deployment. His time in service during the pandemic began in April and has taken him across the state, from Grays Harbor on the far west side to the Quinault Indian Nation, among other deployments.

“I’ve been privileged to be among the people assisting this community, and I know the people around me are making an impact that benefits everyone.”

The National Guard has set up its testing site across campus as well as within the city of Pullman. They saw an increased number of test requests when stationed near off‑campus apartments, with landlords giving incentives like rent reductions and gift cards for their residents to get tested. The outfit also saw an increase in tests when it was made available to WSU faculty and staff on Sept. 29.

A typical day begins before 8 a.m. with setup. By around 9 a.m., the site is ready to welcome individuals seeking tests. Their information is collected by a guardsmen, who then walks the test-takers through the process of conducting nasal swabs. They are far less invasive than previous forms of testing and are self-administered.

Following 12 seconds of swabbing per nostril, the guests have their personal information double checked before leaving the site. Their swabs are counted and stored for collection by Incyte Labs, who is testing samples in coordination with WSU’s One Health Diagnostic Laboratory. Test results take between one and three days on average.

Being in Pullman a month longer than originally planned ensures students can get tested for COVID‑19 before they return to their homes for Thanksgiving. Faculty and staff will also be able to get tested before the December holiday season.

For more information on COVID‑19 testing for faculty and staff, visit Human Resource Service’s website. Cougar Health Services offers asymptomatic testing to WSU students and will continue to do so during the Spring 2021 semester. More information can be found on their website. 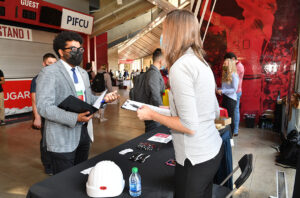