The pet portraits second-year Washington State University veterinary student Jessica Turner paints for family and friends tell a story of each subject. There’s Jackson, an Australian cattle dog and best friend of Turner’s dog, Lily. Yellow Labrador Lula gets Pandora charms for her collar every Christmas. And Oz, a Portuguese water dog, helped a young man propose to his fiancé by wearing the engagement ring around his neck.

“It makes people happy to see their pets,” Turner said. “I like to see the reaction from those who receive a painting.”

Raised in Edmonds, Washington, Turner started painting portraits in high school. Since then, she has created almost 20 portraits for family and friends.

“They seemed to bring people happiness, so I kept doing it,” she said.

Turner’s portraits usually start with a photograph. She works off of a grid to paint the image on the canvas with the correct proportions. One portrait takes about 10 to 20 hours to complete.

Several of her portraits depict beloved deceased pets. Xena’s portrait was a gift to Turner’s stepmother Denise to honor her English bulldog. Charlie, a German Shepherd-husky mix belonging to Turner’s father Jessie, passed away last summer, so Turner gave her father a portrait of Charlie to remember him by.

Turner benefits from her painting too. “Art is really relaxing and gets me out of my head,” she said. “It’s a very good stress reliever.”

Turner’s maternal grandparents Donald and Mary Lou Sherwin were talented ceramic artists and painters, but the rest of the family turned more toward the sciences. Turner’s mother, Serena, is a nurse. Her sister, Kristen, will be an optometrist, and her father, Jessie, is an electrical engineer.

Turner also pursued a program in science when she attended the University of Washington, graduating with a biology degree in 2018. She chose to apply to WSU for her veterinary studies after working with a veterinarian who graduated from the WSU vet school.

“She talked to members of the UW pre-vet club about the program here and how great it was,” said Turner, who will graduate with her DVM in 2022. “I like the community.” 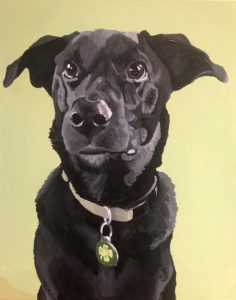 A much-loved subject of Turner’s paintings is Lily, a pit bull-American Staffordshire mix. Turner adopted Lily, pregnant when she was picked up in the Houston area last year. After giving birth to her puppies, Lily was transported to Seattle and found her forever home with Turner at Thanksgiving. A recent photograph shows Turner and Lily hiking at Wallace Falls State Park in Snohomish County, Washington, last summer.

“My mom and I try to hike with her once a week during summers around western Washington,” Turner said.

Turner says her favorite part about Lily is that she loves to cuddle. “As soon as my alarm goes off in the morning, she is so excited to snuggle with me. It is also nice to have a running buddy.”

The day after Martin Luther King, Jr. Day has become a time to reflect on shared values and build relationships based on trust and mutual respect.