Former Washington State University men’s basketball standout Klay Thompson’s No. 1 jersey will be raised to the rafters of Beasley Coliseum during halftime of the Cougar’s Jan. 18 game against Oregon State.

Thompson, drafted in 2011 by the Golden State Warriors and now one of the top shooters in the NBA, spent three seasons in Pullman, becoming the third all‑time leading scorer with an average of nearly 18 points per game. He joins Steve Puidokas as only the second Cougar to have his jersey retired in the history of the men’s basketball program.

“Klay’s impact not only as a student-athlete at Washington State but also as a three‑time World Champion with the Golden State Warriors is most deserving of this recognition,” said WSU Director of Athletics Patrick Chun. “There has only been one basketball jersey retired in WSU history and on Jan. 18 we will add another as the Klay Thompson No. 1 will take its rightful place in WSU immortality. We appreciate how Klay has continued to represent the Cougars globally and we look forward to celebrating his many accomplishments at home in Pullman.”

Tickets in select sections of Beasley can be purchased through the athletic department’s website. 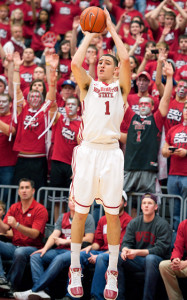 Thompson was selected 11th in the first round of the 2011 NBA draft by the Warriors. He’s won three NBA Championships as a member of the team, averaging 19.5 points and 3.5 rebounds per game in his eight seasons as a Warrior. He also won a gold medal as a member of the USA men’s basketball team during the 2016 Olympic Games in Rio de Janeiro, Brazil.

For the complete men’s and women’s schedules, pricing and more ticket options, visit www.wsucougars.com or call 1‑800‑Go‑Cougs. Contact the athletic ticket office at athletictickets@wsu.edu with any questions.

Zenna Glaser and Claudia B. Jacobo have been awarded the Benjamin A. Gilman International Scholarship, which is designed to help American students gain proficiency in diverse languages.