VANCOUVER, Wash. – The Andrew W. Mellon Foundation has awarded $42,000 to migrate the Electronic Literature Organization’s archives to an open-source repository system. Much of the archiving and documentation will take place at WSU Vancouver’s Electronic Literature Lab, under the leadership of professor Dene Grigar, director of the lab.

The electronic migration is designed to ensure preservation and public accessibility of the archives.

WSU Vancouver is the current sponsoring institution for the Electronic Literature Organization (ELO), and Grigar is its president.

The university also is a partner in the project, titled “A Comprehensive Online Portal for Electronic Literature Works.” Other partners are the ELO, the Electronic Textual Cultures Lab at the University of Victoria (Canada), and Compute Canada.

Nicholas Schiller, WSU Vancouver librarian and associate director of the Electronic Literature Lab, will also participate as the co-principal investigator (Co-PI). In addition, the project involves scholars from two other institutions who also serve as Co-PIs: Leonardo Flores, professor at the University of Puerto Rico Mayagüez, and Abby Adams, digital archivist at the Harry Ransom Center at the University of Texas at Austin. Student research assistants at WSU Vancouver will also help.

The ELO’s digital archives consist of seven collections of original digital literature — typically referred to as electronic literature or e-lit. The project addresses the need for improved access, discovery and preservation for these works so that they will be available to scholars of the present and future. 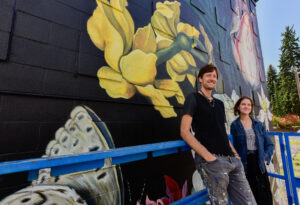