After having only 11 days of sunshine since Jan. 1, last week looked — and felt — as though a giant lid was yanked off overhead.

In a spring marked by clouds and drizzle, everything changed on April 23. Ample sunny skies appeared over the Inland Northwest and stayed for five consecutive days. It was a first for 2018, which, until last week, had been shadowed by cloudy and partly cloudy skies.

A nice spring warmup accommodated the run of sunshine. High temperatures lingered in the 70s, topping out at an impressive 84 degrees in Pullman and 83 in Spokane on April 27. The Tri-Cities hit 88 degrees and Lewiston-Clarkston, 90.

Not surprisingly, sun-starved residents flocked to parks and rivers and ate outdoors. Tulips and other flowers were thrust into full gear. 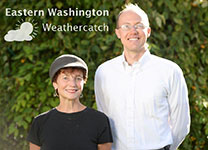 We did not see those kinds of temperatures last April, when the warmest it got in Pullman and Spokane was the mid-60s. So yes, our little heat surge was unusual for this time of year.

Unfortunately, it was also short lived. Like an abrupt mood swing, the weather shifted to rainy and cool overnight. People wearing sunglasses and shorts on Friday switched to jackets and duck boots by Saturday. High temperatures ran in the mid-50s — a drop of 25-30 degrees from the day before.

Nevertheless, the cool-down won’t last. May’s first week is expected to bring warm, sunny weather to the region, with temperatures trending above normal and into the 70s once again.

As for the rest of the month? Relatively warm and dry conditions are predicted. Temperatures shouldn’t soar, though.

Summer will arrive in baby steps. 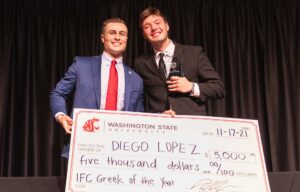 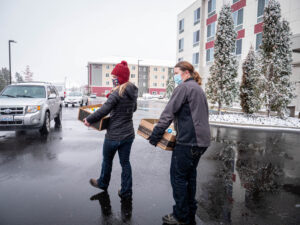