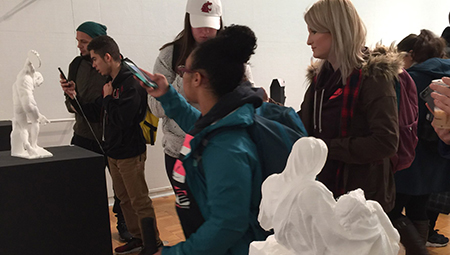 Curated by Meredith and Kuhn, the exhibit features 3D prints of sculptures from antiquity that Meredith utilizes in her classes. It also features works created by Kuhn while teaching students the processes involved in 3D printing and several prints the students created while learning.

“The series of prints of ancient sculptures provide innovative and effective tools for teaching art history,” Meredith said, “while also bringing versions of ancient art to WSU for many people to see.”

Some of the most recognizable of the historic prints are Myron’s “Discobolus” (“Discus-Thrower”), the Vatican’s “Laocoön” and Michelangelo’s “David” and “Pietà.”

Limitations on printing size and material in the versions on display highlight issues of originality, medium and scale, Meredith said.

“Once printed,” she said, “it becomes possible to create a myriad of forms by experimenting with scale, for example.”

The miniature versions also relate to the history of collecting, she said.

“Around the late nineteenth century, life-size reproductions of well-known sculptures were made using plaster casts. The few that survive remain useful as teaching collections,” Meredith said. “Such moments of reproduction used a new technology to contribute to the history of that object and our understanding of it. Today, 3D printing is doing that again in yet another iteration.”

The works Kuhn and his students created in virtual space reproduce everyday objects, such as shoes, figurines and roadkill. Kinetic forms also underscore the utilitarian nature of the students’ work.

“As still lifes,” he said, “the functional is rendered non-functional. Viewers are challenged to consider which elements are fundamental to the original.”

Designed exclusively at a distance, using a computer, the design-centered focus calls attention to the intangibility of the process of construction and execution, Kuhn said.

Conceptual pairings of the organic with the inorganic also draw attention to the materiality of the 3D-printing process, he said.

“This show really exemplifies the innovative ways the Department of Fine Arts, in the College of Arts and Sciences, utilizes tools to examine and share perspectives on the world,” said Squeak Meisel, chair. “Making happens here.”

The process should place more value on innovation, entrepreneurship and other forms of scholarly impact, a multi-institution coalition argued recently in the journal Science.

The Center for Entrepreneurship has developed a class for WSU student-athletes interested in opportunities related to name, image, and likeness.

WSU students, faculty, and staff recently joined Pullman community members to “plant” a series of interpretive signs between the creek and a paved path just east of the intersection at north Grand Avenue and Ritchie Street.

New WSU research offers an alternative way to understand and minimize health impacts from human-caused changes to the climate and environment.

The free, eight‑hour virtual workshop takes place on Friday, Sept. 17 and will explore current collaborations in energy research and preview the new Energy Sciences Center on the PNNL campus.

WSU scientist Jenifer McIntyre, who studies urban runoff and its effects on aquatic animals, is set to testify virtually Thursday, July 15, before members of the Natural Resources Subcommittee on Oversight and Investigations.