The Washington State University Common Reading Program has announced the 2021-22 book to be used by first-year and other students in classes and beyond is Tales of Two Americas: Stories of Inequality in a Divided Nation, edited by John Freeman.

Electronic desk copies will be made available soon to faculty who might wish to incorporate topics from the book into their courses.

For the second year, the WSU Vancouver Common Reading book will be Tell Me Who You Are, by Winnona Guo and Priya Vulchi.

Organizers from the Pullman and Vancouver campuses anticipate collaborating on joint programming that will discuss common themes found in both books.

Selection by the provost

Each year since 2007, a volunteer committee reviews book nominations submitted by the university community. Its top choices are sent to the provost and executive vice president for a final selection. Provost Elizabeth Chilton, who joined WSU in August, chose Tales of Two Americas.

“This book’s topic is critically important, and every student at WSU should have the opportunity to join the 36 contemporary writers in examining life in a deeply divided America,” she said in a letter to Karen Weathermon, director of the Common Reading Program.

“We are delighted with Provost Chilton’s selection, and feel that there will be many opportunities for faculty to feature book topics in courses across disciplines,” said Weathermon.

A text for these times 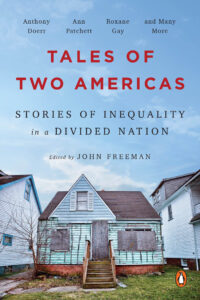 Members of the selection committee said in a note to the provost, “The interest in this book in this year stems partly from the committee’s awareness that the past year has revealed more starkly many kinds of inequalities and divisions that have long been present but have not always been so sharply seen—in the social determinants of health and access to healthcare, in access to education and technology, in economic status and employment, and in the continuing effects of systemic racism, as well as other areas.

“As we begin to move beyond the pandemic and back into more regular practices, the committee felt it is important to keep our eyes on what the year has revealed.”

The three other books forwarded for consideration were:

A collection of glimpses into inequality

Tales of Two Americas was published in 2017 by Penguin Books. An anthology, it features fiction and non-fiction essays, short stories, and poems about class, socioeconomic, and racial inequalities across many regions of the U.S., including the Pacific Northwest cities of Boise, Portland, and Seattle.

“In Tales of Two Americas, some of the literary world’s most exciting writers look beyond numbers and wages to convey what it feels like to live in this divided nation,” the book’s cover notes. “Their extraordinarily powerful (writings) demonstrate how boundaries break down when experiences are shared, and that in sharing our stories we can help to alleviate a suffering that touches so many people.”

The book is also reflective of the career body of work by editor John Freeman, a book critic, champion of writers, author, interviewer, educator, and poet. A former president of the National Book Critics Circle, executive editor of Literary Hub, and editor of the U.K. publication Granta, he created his own Freeman’s journal featuring issues of “The Best New Writing On” focused on topics such as arrival, humor, love, California, family, and home. He has written three nonfiction books and two collections of poetry and is artist-in-residence in arts and science at New York University. Freeman also teaches writing at The New School’s Schools of Public Engagement in New York City.