Cougar fans can cheer on the WSU Esports Club from the comfort of their homes starting April 22.

The Electronic Gaming Federation’s Power Series virtual tournament, pitting teams from several universities against each other in the video game Rocket League, is being broadcast online through the popular gaming live-stream service Twitch.

WSU’s Esports Club with enter the tournament on April 22, competing against University of Washington at 5:20 p.m. and San Jose State at 6 p.m. (Pacific Time). The club has planned appearances in the tournament’s qualifying rounds on April 29 and May 6. Check the club’s official Twitter page for updates on future competition times. 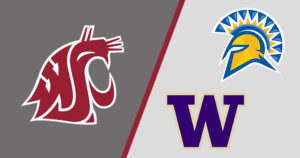 Three-person teams from 41 universities will be competing in the tournament, all from separate remote locations.

The tournament began with qualifying rounds running from April 20 through May 6 and will culminate in a championship round ending May 10.

Earlier this year, WSU’s Esports Club placed third in EFG’s Power Five Invitational held in New York City. The club has recently risen to the level of national competition due to the enthusiastic efforts of its roughly 400 members and an ongoing partnership between WSU Student Affairs and the university’s Global Campus.