After serving in the U.S. Army for two decades, Penny Martinez wanted to come home to the Palouse.

Following her retirement from the service in 2010, Martinez packed up her three children and drove from Texas to Washington. Work wasn’t hard to come by, but the first opportunity she landed was in Idaho. Martinez aspired to work in the state she grew up in, specifically at Washington State University, and continued exploring potential options.

In August, a perfect opportunity came her way. She’s now veterans coordinator for the WSU Office of Veterans Affairs.

“My sole purpose,” she said, “is to ensure that veteran and dependent students using their benefits have as smooth of a process as possible.”

Martinez supports student veterans on the Pullman, Spokane, and Everett campuses, as well as those taking classes via WSU Global. WSU Vancouver’s veteran’s office is led by Michaela Loveridge and offers drop-in hours Monday through Friday. WSU Tri Cities also boasts a staff of veteran work-study students and a VetCORPS navigator inside Room 304 of the Elson S. Floyd Building.

As a veterans coordinator, Martinez assists students in submitting benefits data to the U.S. Office of Veterans Affairs, insuring students who’ve served their country have as few disruptions as possible. She and her staff inside Room 120B of the Holland Library also assist those who seek out the office in search of resources or just a place to study on a comfy couch and supportive environment.

“I believe that there are some great opportunities for additional programming dedicated to our Veteran and military affiliated students,” Martinez said.

A graduate of Garfield High School in the small town of Palouse, she enlisted in the Army Reserves before receiving her diploma. She turned 18 the same day she arrived for basic training at Fort McClellan in Alabama. Later, as an Eastern Washington University student, Martinez opted to transition to active duty, which took her around the world, including two assignments in Germany, first with Criminal Investigations Command and then with a Base Support Battalion.  While stationed at Fort Leavenworth, she and her unit were awarded a Presidential Unit Citation for their response to a riot at the United States Disciplinary Barracks.

During a decade stationed at Fort Hood in Killeen, Texas, she was deployed to Iraq as part of Operation Iraqi Freedom II from 2003 to 2004. In 2009, her unit was targeted by Fort Hood gunman Nidal Hasan, though Martinez was not present when the mass-shooting took place. 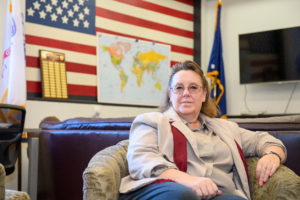 In addition to answering the questions of student veterans, Martinez also helps dependent students with the benefits they are entitled to receive. Her advice to faculty and staff working with veterans is to recognize they don’t have the same life experiences as the traditional, fresh-from-high-school students they typically encounter.

“When in doubt simply ask them, have a conversation and they will speak with you honestly,” she said.