PULLMAN, Wash. – Exactly 40 years since he was handed his own Washington State University diploma, Ron Mittelhammer looked on from the dais one last time as his students and protégés marched into Beasley Coliseum, flung caps into the sky and joined him as Cougar alumni.

“The sights and sounds of a WSU commencement — there’s nothing like it,” said Mittelhammer. “Becoming a Cougar means you’ve joined an amazing family — one that gets bigger and better with every graduation. It’s a moment of achievement and endless possibilities.”

New possibilities — and the perennial passion that has made him one of the university’s most dedicated Cougars — are calling. On May 31, Mittelhammer will step down as dean of WSU’s College of Agricultural, Human and Natural Resource Sciences (CAHNRS) to concentrate on what he calls the best job in the world: teaching graduate students and pursuing research in his beloved economic sciences.

Mittelhammer returns to the classroom as the latest recipient of the WSU Alumni Association’s Alumni Achievement Award, reflecting decades of commitment and involvement that, peers say, rank him among the most influential WSU alumni.

From mentoring hundreds of students, to the successful creation of the School of Economic Sciences, to leading one of WSU’s largest and most complex colleges, Mittelhammer continuously works to make his institution better.

Created in 1970 by the WSU Alumni Association Board of Directors, the Alumni Achievement Award is the organization’s highest honor.

“No matter what WSU has asked him to do, Ron has always answered the call,” said Tim Pavish, Alumni Association executive director. “We’ve been waiting a long time to present him with this award.”

A teacher with spirit

Arriving from New Jersey in 1974 to seek his doctorate in agricultural economics, Mittelhammer never left WSU. Hired in 1977 as an assistant professor a year before his graduation, he began a lifelong passion for teaching that’s never faded.

“In every one of my classes, I see our next generation of economists, scientists, and teachers seizing big ideas and making them their own,” said Mittelhammer. “I wouldn’t trade it for the world.”

A celebrated instructor and scholar, he teaches with rigorous discipline and visible Cougar pride.

“Ron is more ‘Coug’ than just about anyone except perhaps Butch himself,” says Rich Koenig, associate dean of WSU Extension. “He flies the colors 24-7.” 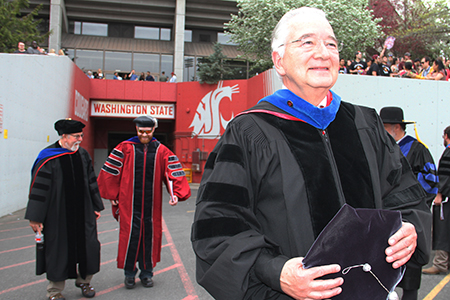 “The heart of a Cougar draws us together and makes big things possible,” says Mittelhammer, who remembers often watching the late President Glenn Terrell grab a bullhorn and lead cheers in the 1970s. “That can-do spirit hooked me then, and it still inspires me today. That’s why I share it as often as I can.”

With his wife Linda, a student experience coordinator with WSU’s Office of International Programs, Ron is a constant supporter of community efforts, including back-to-school drives for children in need, Pullman downtown improvement efforts, and the local Chamber of Commerce. As a volunteer, he has led everything from the American Agricultural Economics Association to campus committees, to research centers and the Academic Showcase.

Along the way, many honors have come, among them the WSU Eminent Faculty Award; and one of the original appointments as Regents Professor, the highest faculty rank at WSU.

“Few faculty and leaders have had as much impact on WSU as Ron has,” says Koenig. “He’s held just about every position from rank-and-file to leadership of this institution. He’s left an indelible mark in each one.”

WSU’s School of Economic Sciences is Mittelhammer’s brainchild. In 2003, he led a committee that created its design, merging two different departments from two different colleges. To lend it some much-needed stability, he agreed to become the School’s first director, serving for six years.

At the same time, Mittelhammer’s textbooks have become essential reading for statistics and econometrics in many colleges and universities nationwide.

“Our School went on to gain an outstanding reputation for graduating students with rigorous skills,” says Jill McCluskey, Distinguished Professor and Associate Director in Economic Sciences. “That’s largely due to Ron: His work designing the curriculum, his mentorship, and his leadership.”

In June 2013, Mittelhammer stepped up as interim Dean of CAHNRS for one year, and then, ultimately led the college for an additional four years as Dean, including a year-long commitment as co-Provost of WSU following the passing of then-President Elson Floyd.

“Ron was often tapped to serve at critical times, when someone with his credibility, knowledge, and ethics was sorely needed,” said Rich Zack, CAHNRS Associate Dean. “It might have been easier for him to say he was busy, or had other obligations.”

Mittelhammer, however, always stepped up to the challenge, and WSU is a far better place for it, Zack says.

“Ron could easily have taken teaching or leadership jobs elsewhere, but he’s remained at the university that means so much to him,” he added. “That’s how much he loves WSU.”

“Joining the list of Alumni Achievement Award winners is an incredible and humbling honor,” said Mittelhammer. “Washington State University is a place like no other, and CAHNRS is an amazing college. Every student, and every faculty and staff member is called to leave this institution better than when we found it. That’s what I’ve tried to do.”

“While this award is in my name, it’s really a testament to the work, energy and vision of so many colleagues, friends and partners who’ve joined me in keeping our land-grant mission going strong,” he added. “I’ve always been proud to serve, but none of it would have been possible without the support of my wife, Linda, and the teamwork of my incredible CAHNRS and WSU friends and colleagues. We really are a family.”