‘Lore,’ a 2019 film by Sky Hopinka, is an experimental work that weaves together family, myth, and trauma, with traces of nostalgia articulated in terms of lore. Images of friends and landscapes are cut, fragmented, and reassembled on an overhead projector as the artist’s hands guide their shape and construction. Overlaying the kaleidoscopic imagery, a narrator’s voice tells a ruminative story. The film culminates in a languorous and communal scene as a group of musicians perform Bo Diddley’s 1955 “Heart-O-Matic Love,” a song about love as a road trip.

Hopinka is a member of the Ho-Chunk Nation and a descendant of the Pechanga Band of Luiseño Indians. He was born in Ferndale, Washington and moved to Southern California as a teenager, later spending a number of years in Portland, Oregon, where he studied and taught Chinuk Wawa, an amalgamated contact language of the Lower Columbia River Basin. Hopinka’s art centers around personal perceptions of Native homelands as well as correlations between language and culture in relation to home and land. Hopinka has said, “Deconstructing language [through cinema] is a way for me to be free from the dogma of traditional storytelling and then, from there, to explore or propose more of what Indigenous cinema has the possibility to look like.”

Hopinka received his BA from Portland State University in Liberal Arts and his MFA in Film, Video, Animation, and New Genres from the University of Wisconsin-Milwaukee, and currently teaches at Bard College in Film and Electronic Arts.

Funding for this exhibition is provided by the members of the Jordan Schnitzer Museum of Art WSU. WSU Pullman is located on the ceded lands of the Nimíipuu (Nez Perce) Tribe and the traditional homelands of the Palus Band of Indians. We acknowledge their presence here since time immemorial and recognize their continuing connection to the land, to the water, and to their ancestors.

LOCATION | The Jordan Schnitzer Museum of Art WSU is located in the Crimson Cube (on Wilson Road across from Martin Stadium and the CUB) on the WSU Pullman campus. For more information please contact the museum at 509-335-1910. The museum is open Tuesday through Friday from 1–4 p.m., Saturday from 10 a.m. to 4 p.m., closed Sunday, Monday and University holidays. 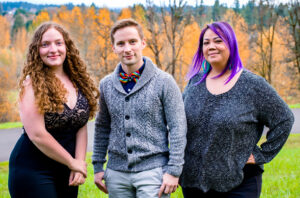 From class project to social dialogue

Three WSU students developed a podcast surrounding the topic of culturally- and linguistically-responsive pedagogy as an alternative to a conventional class assessment or test.