The research shows healthy elk can contract the rapidly spreading disease, known formally as Treponeme-associated hoof disease (TAHD), by simply walking on soil contaminated previously by infected hooves. Until the WSU discovery, veterinarians and biologists lacked a clear understanding of how the disease was spread.

Affected elk suffer with deformed hooves, lameness, and increasingly poor health as a result of the infection. The disease is spreading unabated and has been found in Washington, Idaho, Oregon, and California.

Researchers will discuss the findings Sept. 23 during a virtual meeting via Zoom. The public and media is invited. Login information and other details are available on the WSU Veterinary Microbiology and Pathology website.

“Our preliminary results indicate that TAHD can be transmitted to otherwise healthy elk through exposure to soil contaminated with hooves from affected elk,” Professor Margaret Wild said. Wild is a wildlife disease veterinarian and leads the WSU Elk Hoof Disease research program. “It is still unknown if other factors, such as an elk’s nutritional condition or exposure to chemicals, promotes the disease, but our findings show the infection can occur without these added insults,” Wild added.

“We were very anxious to get this important work underway on behalf of the people of Washington who have made it a priority and the animals that are suffering,” Dr. Wild said. “COVID-19 just threw about 7 months of delay in everything and required that we change our research approach. It was frustrating so we were glad to start work at the new research facility.”

Master of Science graduate degree candidate Zach Robinson, working under Dr. Wild, conducted the study. Originally from Longview, Robinson effectively grew up in the epicenter of where the disease originated in Washington. His interest in wildlife propelled his studies throughout his undergraduate education toward this disease in elk. For him, it’s a bit personal.

“I grew up hearing about and seeing this disease firsthand,” Robinson said. “It is very difficult to see elk suffering and wasting away and not know why or how this is happening. I was very excited to join the WSU team and our discovery now provides a pathway for additional studies that hopefully will benefit these important animals.”

To conduct the study, WSU brought in six wild, healthy elk calves from central Washington captured by Washington Department of Fish and Wildlife. They were housed in specially built individual biosecure stalls, each with their own feeder and waterer. Wood shavings were used as bedding in a portion of the stall, while soil otherwise covered about one quarter of the stall floor. 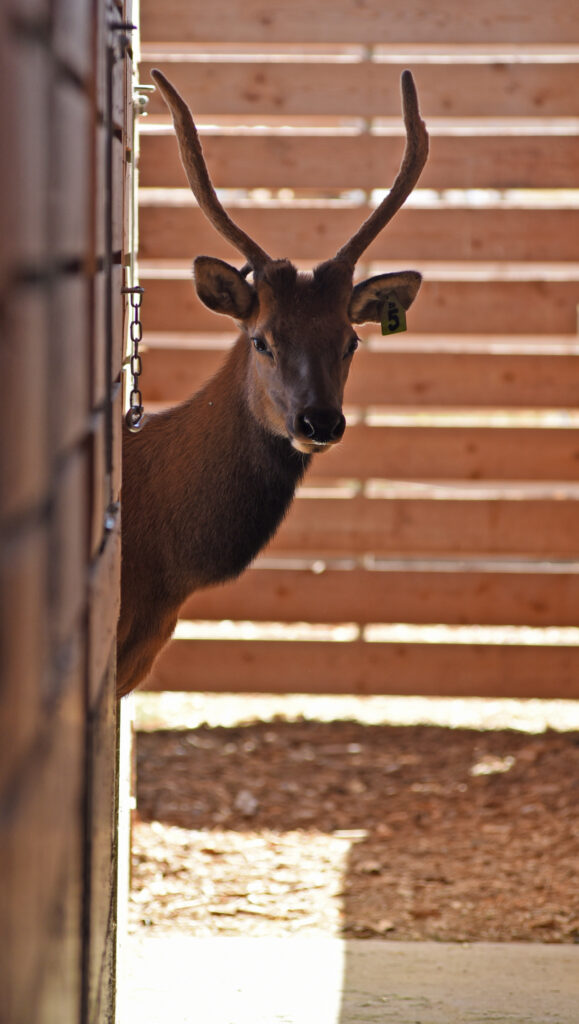 The soil in the study stalls was obtained from a forested natural area in the Mount St. Helen’s region where herbicides had not been used. The goal was to ensure the soil conditions represented those found in a highly affected location and that as many variables as possible, such as the elimination of pesticide applications, were controlled.

Working with WDFW and the Northwest Indian Fisheries Commission, hooves infected with TAHD were obtained from elk. The researchers placed the hooves in an ultra-cold freezer (-112 ° F) within 24 hours of death to preserve all bacteria and other germs living on the hooves.

Four of the six study elk were exposed to the affected hooves. Robinson and the team also collected normal hooves and used them to expose the remaining two elk to serve as control animals. The controls were treated identically to the treatment elk except for the source of the hooves.

On treatment days, hooves were thawed, sampled for confirmatory diagnostic testing, and then minced and mixed with soil to make a treatment mixture. The mixture was then placed in soil in the elk’s pen. To ensure contact between the foot and the contaminated soil, about a teaspoonful of the preparation was also placed between the toes on each of two feet on each elk and it was held it in place with a wrap.

These treatments were repeated at 2–4-week intervals between October and March.

Within 2 to 3 months, the team saw early lesions on the treated elk. By four months, all four of the animals had moderate grade infections that were indistinguishable from those found in wild elk.

Under federal and state animal care laws as well as university policies, the affected elk were humanely euthanized before suffering uncontrollable pain like elk in the wild.

A WSU veterinary pathologist examined the treated animals’ hooves and confirmed all indeed had TAHD. The control elk that were treated with the soil mixture from normal hooves suffered no visible or microscopic evidence of TAHD.

Additional testing is underway to determine all the types of bacteria present in the hooves by sequencing bacterial DNA. Early results have detected Treponema bacteria in samples of lesions from the four treatment elk, but not from the control elk.

“A DNA sequencing technique will also be used to search for Treponema bacteria in soil from the pens,” Dr. Wild explained. “This will be a technically challenging task, but such a finding would lend further support for the soil as at least a short-term reservoir of disease-causing bacteria. We are also currently testing more natural means of transmission through soil in the pen without our applying contaminated soil directly to the elk’s feet.”