“Hop King: Ezra Meeker’s Boom Years,” by Dennis M. Larsen, is the first comprehensive biography to chronicle the rise and fall of Meeker’s hop empire, as well as his key role in Washington Territory’s growth. Larsen believes Meeker’s effect on the region has largely gone unnoticed and writes in his introduction, “Meeker deserves long overdue recognition for the influential part he played in building the foundation of the modern state of Washington.” 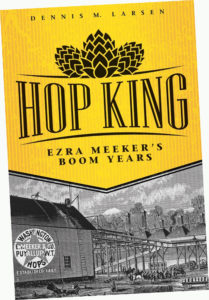 Covering Meeker’s life 1860-96, the book describes his staggering success with the lucrative plant that earned him the moniker, “Hop King of the World,” and enabled him to pursue a variety of other business, political and charitable interests. Some were rewarding; others were controversial or even utter failures.

He traveled abroad, promoted Washington and Puget Sound, participated in the women’s suffrage movement and helped start schools and libraries. He ran for Congress, testified to a grand jury about Tacoma’s November 1885 Chinese expulsion, expended a great deal of time and effort trying to develop a market for beet sugar and became entangled in multiple lawsuits.

By 1890, an E. Meeker & Co. hop circular boasted Washington and Oregon would – barring unforeseen circumstances – produce “fully seventy thousand bales of hops” that year. But it wasn’t long before Meeker noticed the foliage in his hop fields seemed “off color . . . not natural” and discovered his plants were teeming with pale green aphids – hop lice.

That awful moment signaled the ultimate collapse of the Hop King’s reign. Although his philanthropy and numerous other pursuits left a lasting impact, this marked the end of an era.

Author Larsen is a resident of Olympia, Wash., and is considered an expert on Oregon Trail pioneer Meeker.