PULLMAN, Wash. – Rare map dealer E. Forbes Smiley III, who stole more than $3 million worth of antique maps before he was caught in 2005, is the subject of a talk by award-winning investigative reporter Michael Blanding at 4 p.m. Tuesday, April 12, in the Avery Hall Bundy Reading Room at Washington State University. A reception will follow.

Blanding published a 2014 nonfiction book, “The Map Thief,” about Smiley’s case and the world of rare map creation, curation and collection. The book was a New York Times bestseller, NPR Book of the Year, New England Society Book Award winner and finalist for the Chautauqua Prize and Massachusetts Book Awards.

He will discuss new information about the case – including some gleaned through the first interview with Smiley – that “paints a psychological portrait of a man driven by desperation to betray his friends and colleagues,” according to the author. He will talk about the history behind the maps Smiley stole and the continuing implications for library security.

From expert to thief 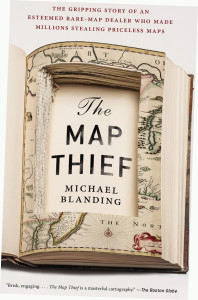 Smiley at his peak was a respected and well-known map dealer, the go-to expert for collectors of rare, ancient and sought-after cartographical relics. He played a significant role in building two major collections donated to research libraries.

But that all changed on June 8, 2005, when librarian Naomi Saito at Yale University’s Beinecke Rare Book and Manuscript Library spotted an X-Acto blade Smiley had dropped on a reading room floor. Police arrested him, and librarians found four maps from the Beinecke in his briefcase.

A year later in court, Smiley admitted to having stolen almost 100 maps from one British and six U.S. libraries, which he sold to unsuspecting buyers to pay for a luxury lifestyle. He served 3½ years in prison but is suspected of other thefts around the world.

A map lover himself, Blanding wrote in “The Map Thief” that it was natural he would be drawn to Smiley’s story: “The irony of the story, as I came to understand it, is that this man who was stealing maps had so clearly lost his way…As I spoke with Smiley and those around him, I found myself writing the map of a man, a profession and an obsession. And like any good map, his story ultimately bleeds off into the margins between the known and the unknowable.”

Blanding is a senior fellow at the Schuster Institute of Investigative Journalism at Brandeis University. His work has appeared in WIRED, Slate, The Nation, The New Republic, The Boston Globe Magazine and Boston, among other publications. His first book, “The Coke Machine: The Dirty Truth Behind the World’s Favorite Soft Drink,” was published by Avery/Penguin in 2010.

The WSU presentation is sponsored by the Department of English and WSU Libraries.