PULLMAN, Wash. – The published works of Washington State University authors will be recognized at the third annual “Crimson Reads: A Celebration of WSU Authors,” at 3:30 p.m. Tuesday, March 22, in the Terrell Library atrium. Crimson Reads is part of WSU Showcase, the annual celebration of faculty, staff and student excellence.

Refreshments will be offered during a reception open to the public. WSU Libraries Dean Jay Starratt will present introductory remarks and English professor and faculty author Nancy Bell will give an address. For more about Crimson Reads, including the full book list, visit http://libguides.libraries.wsu.edu/crimsonreads. Learn more about Showcase at https://showcase.wsu.edu/.

Among this year’s honorees are books about Cougar Nation’s pride and citizenship in its first 50 years; translated poems of a 14th century knight, diplomat and poet; and the impact of women on Pacific Northwest history from earliest times to the present. 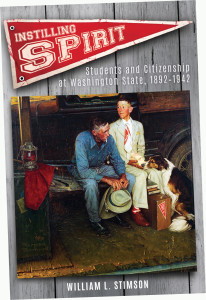 Even in 1892, the year Washington Agricultural College opened its doors to students who would otherwise not have received a higher education, Cougs were passionate about their school. William Stimson starts “Instilling Spirit: Students and Citizenship at Washington State, 1892-1942” (November 2015, WSU Press) with a compelling example.

When WSU regent Andrew H. Smith of Tacoma called for the replacement of the college’s beloved first president, George Lilley, WSU students first petitioned the Board of Regents, asking that Lilley continue in his post, then made their case in the student newspaper. Lilley was replaced anyway, and Smith escorted the new (and short-term) president, John W. Heston, to Pullman.

Students responded by throwing eggs and rotten cabbage at the regent as he left campus. Though condemned as a “disgraceful episode” by WSU’s third president, Enoch A. Bryan, the egging was a hint of the student involvement legacy to come.

“The students of 1892 did not rebel against society. In a sense they rebelled in favor of society,” wrote Stimson, a WSU alum and professor of journalism at Eastern Washington University. “They fully appreciated what society had done for them in opening this college. President Lilley was the face of the college to them and they rallied around him.”

As war loomed on the horizon, college campuses like WSC became centers of civic pride and cooperation. In 1932, when politics in Europe were at a boiling point, another WSC president, Ernest O. Holland, saw reason for hope because of the stabilizing effect of education.

“The men and women of America, members of our great middle class, are dreaming dreams for their children…” Holland wrote in an article. “Capitalistic society is safe where the children of the poorest can have their opportunity through our public schools to make the most of their talents and capacities.”

“The main purpose of the book was to show WSC as a case example of how the United States used the college years to train citizens and hone civic spirit,” Stimson said. “Everything about college life, from dorm life to the intense interaction between teachers and students, taught students about living in a humane and democratic society. It seemed to work. The students of this era turned into ‘The Greatest Generation.’” 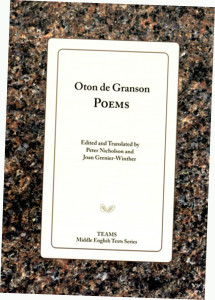 Oton de Granson, a well known knight and diplomat of the 14th-century French and British courts, was also a respected poet who counted Eustache Deschamps and Geoffrey Chaucer among his contemporaries.

“It was a pleasure to go through the text and suggest ways in which we could translate what the French said but in such a way that was not stilted or incomprehensible in English,” Grenier-Winther said.

“This period in French literature, between the High Middle Ages and the Renaissance, has largely been ignored,” she said. “There are any number of texts that remain unedited – i.e., only available in manuscript form. These are becoming increasingly hard to consult due to their fragility, and only some have been digitized.”

Like other poets of his time, Granson wrote of love, specifically unrequited love, in more than 100 poems. In fact, he was an early adopter and developer, with Chaucer, of the motif of the unhappy lover on St. Valentine’s Day, Grenier-Winther said. Chaucer adapted three of Granson’s balades in his “Complaint of Venus,” acknowledging the knight as “Graunson, flour of hem that make in Fraunce” (Granson, the flower of those who write poetry in France).

“At a time when nobles aspired to be cultured and poets sought the company of nobles, he was among the first and most successful of the poets who were also courtiers,” Grenier-Winther wrote. “And as one who moved in both a French-speaking and an English-speaking world, he occupies a unique place in the literary culture of his time.” 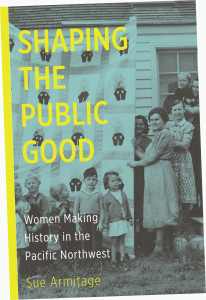 In writing “Shaping the Public Good: Women Making History in the Pacific Northwest” (October 2015, Oregon State University Press), author and WSU history professor emerita Sue Armitage described how women of all races, classes and eras influenced the region’s history – “the famous, the forgotten and the women in between.”

Their primary contributions came in building and rebuilding families and communities wherever they were.

“Cooperation was basic: women rarely acted alone,” Armitage wrote. “They worked with family members – male as well as female relatives – to establish their families and to build communities. As some communities crumbled, women worked to rebuild and to adapt or change them. This effort is as real and ongoing today as it was two centuries ago.”

Among the hundreds of stories Armitage included in her book, one of her favorites involved the “Umatilla Seven.” Oregon women won the right to vote in 1912, eight years before women in most American states. But few women used their votes as successfully as seven women in Umatilla, Ore., (population 198) in 1916.

Fed up with an all-male city council that paid its bills so late that the street lights were cut off and the city sidewalks were unswept, the women mounted a “stealth” attack, Armitage wrote. Because few residents bothered to vote, and write-ins were allowed, they nominated and voted for each other and got other women to do the same.

All seven women were elected, including Laura Starcher, who beat her own husband and incumbent mayor, E.E. Starcher, by a 26-8 vote margin to become Umatilla’s new mayor. The other elected officials were Bertha Cherry, Lola Merrick, Stella Paulu, Gladys Spinning, Anna Means and Chauncey Brownell.

In the next four years, the female majority on the city council improved water and light services, instituted garbage collections, budgeted for street and sidewalk projects, put up railroad-crossing signs, founded a library and took action to combat the influenza epidemic of 1918.

In 1920, however, none of the women ran for reelection, and they did not publicly explain why.

“Perhaps they simply concluded that they had accomplished their goals,” Armitage wrote.