After more than 60 years in service to agriculture, Johnson Hall is coming down.

Under way this fall, the $8 million teardown of the Pullman campus’ fourth largest structure is Washington State University’s biggest-ever demolition project. It will make room for a new, federally funded agriculture research building.

“It’s a relic of a different time when buildings were big and housed a lot of people,” added Rich Koenig, chair of the Department of Crop and Soil Sciences.

There won’t be an implosion or wrecking ball. Interior demolition and abatement of Johnson’s 169,000-square-foot main wing began in August. The structure will come down floor by floor starting in November with the help of robotic jackhammers. Mechanical “munchers” will crumble concrete walls and floors from December through February. Neighbors should expect noise and vibrations, particularly when the footings are demolished next February and March.

“Research has changed a lot since Johnson Hall was built,” said Tim Murray, chair of the Department of Plant Pathology. “At that time, agricultural research was field and greenhouse-based. Electricity and cooling worked for the time but aren’t really adequate to support modern research.”

While the concrete structure was sound, the building was uncomfortable to work in—drafty, uncooled offices were hot in summer, cold in winter—and noisy from frequent drilling to upgrade aging power and pipes.

“It would usually reverberate when you were trying to teach a class,” Murray said.

But for all its faults, Johnson Hall felt like home, Koenig said.

“It was filled with so many people that it made collaboration easy,” he said. “One could walk down a hall and bounce ideas off someone from a completely different department and discipline. Often, these conversations led to new ways of looking at things. This is critical for students and faculty.”

“We felt like a cohesive unit,” added Murray, who worked out of Johnson Hall from 1978, when he arrived at WSU as a graduate student, until this year. “Our USDA colleagues were there—we saw everybody, and our students saw us.”

More than 300 scientists, students, and staff moved out of the building this summer, occupying spaces across campus. WSU Facilities Services and CAHNRS Operations had to figure out what to do with decades of accumulated furniture, equipment, and fittings. Occupants used a color-coded system to mark thousands of items for moving, surplus, or disposal. Catch rooms filled with wood and metal desks, filing cabinets, beakers, microscopes, and overhead projectors. Large dumpsters were filled and emptied daily.

The team made every effort to salvage, reuse, and recycle Johnson’s resources, using apps and message boards to get the word out and share items with WSU research centers, farms, and research and teaching programs.

“We’ve got other buildings from this era, and can’t find replacement parts for them,” said Cynthia Arbour, project manager for WSU Facilities Services. “We were finding those rare things that we need, pulling them out, sorting and storing them.”

“The supply chain is tight right now,” Kearney said. Lab countertops like the ones in Johnson Hall are made overseas; a number of these were removed and will go into other buildings, instead of buying new.

Johnson Annex, the building’s smaller south wing and current home to the Department of Apparel, Merchandising, Design, and Textiles (AMDT), will remain. So will the glassed-in original foyer—”We’re keeping what we call the ‘Jewel Box,'” Arbour said—as well as most of the mature trees on the building’s parklike south side.

“Our new building will serve modern research much better,” Murray said. “Change is challenging, but it can also be invigorating. At the same time, when you spend 40 years in a place, you’re sorry to see it go.” 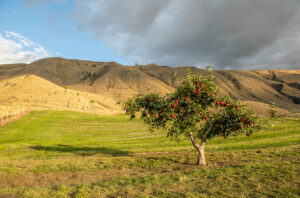