After more than three years of serving as executive director for tribal relations primarily focused on the Pullman campus, Zoe Higheagle Strong is taking on broader, systemwide responsibilities and coordination of tribal relations and Native American programs and initiatives.

“In elevating Dr. Higheagle Strong to this systemwide role, WSU is further committing itself to better understanding the perspectives of tribal groups across the region as well as enhancing the relationships we have with these communities,” WSU System President Kirk Schulz said.

In this new role, Higheagle Strong will contribute as a member of systemwide collaborative groups, bringing insights from Native American leaders and groups into foundational conversations of policy and practice.

“I’m excited to be serving in this new systemwide capacity, which allows for the inclusion of native and tribal advisory group perspectives earlier in the decision-making process,” Higheagle Strong said. “I celebrate WSU’s decision to move tribal relations to the Office of the President acknowledging the sovereign status of Tribes and tangibly supporting the growing work stemmed from Executive Policy 41 – Tribal Engagement, Consultation and Consent for Joint WSU-tribal research activities and projects.”

“I’m excited to be serving in this new systemwide capacity, which allows for the inclusion of native and tribal advisory group perspectives earlier in the decision-making process.”

EP 41 is the first of its kind among the Pacific Northwest universities.

WSU also recently secured additional funding via a USDA grant Higheagle Strong is the principal investigator on to expand the university’s Tribal Nation Leadership Program. The program has been enhanced to offer classes systemwide and has more funding available to bring Native cultural representatives and elders to speak on campuses.

Higheagle Strong says she’s looking forward to resuming visits to Native American communities in the near future as well as attending native advisory board meetings across the system. Due to the COVID-19 pandemic, visits to native communities were shut down, slowing progress on the development of further memorandums of understanding with the region’s tribes.

In addition to her new systemwide responsibilities, Higheagle Strong will continue to serve as director of the Center for Native American Research and Collaborations. She was recently promoted to associate professor of educational psychology, whose research focuses on social, emotional, and environmental factors that shape Native American adolescent development and educational outcomes. 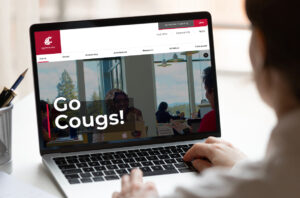