Many researchers can spend a lifetime presenting their work at professional conferences, publishing in scientific journals, or lecturing students in their classrooms.

They don’t often get to see a research project started more than 25 years ago make a difference and maybe even save lives during the middle of a war.

But when Ukraine connected to the European power grid earlier this month, technology developed by Washington State University researchers over several decades made a difference in ensuring the stable operation of critical electricity interconnections.

“This is the first time that our tool is being used for such an important cause,” said Mani Venkatasubramanian, Boeing Distinguished Professor in the School of Electrical Engineering and Computer Science and director of the Energy Systems Innovation Center at WSU who has led the research for decades. “It’s very gratifying that as a research group we are able to contribute to addressing a problem of significance using our technology.”

Shortly before the Russian invasion, Ukraine disconnected from the Russian power grid in late February. The Ukrainian government quickly asked for help in connecting to the European power grid, particularly in case some of their generators were destroyed. Given the emergency condition, the operators did not have the chance to do the many engineering studies and testing that would normally have occurred to connect two huge power grids.

In particular, connecting the two systems means that generators in Ukraine could cause power oscillations against the rest of the system in Europe. The oscillations can cause fluctuations in power outputs that, in the worst case, can lead to large-scale power failures.  Furthermore, the models for understanding the power grid systems are often not up to date, so that planning a connection may not match what is happening on power grids in real-time.

Venkatasubramanian, who holds a joint appointment at Pacific Northwest National Laboratory as part of the WSU/PNNL Advanced Grid Institute, has worked with generations of his graduate students to develop online monitoring tools to detect the harmful oscillations in a large power grid. He received a patent for his work in 2011. He later started a company, Phasor Informatics LLC, that has licensed the technology and is working to commercialize it for industry adoption.

The software uses a suite of algorithms to assess oscillation problems in transmission systems and to notify operators when they occur.

“Our tool is designed to monitor the grid continuously to check if all the oscillatory responses are well damped or if there is a potential problem that is emerging,” he said. “I’ve had many students who have contributed their dissertations to working on different aspects of this problem, and over the years, we have developed multiple methods to monitor oscillations, which is really the strength of our approach.”

With funding through the Power Systems Engineering Research Center, a National Science Foundation Industry-University Cooperative Research Center that addresses power grid challenges, WSU researchers worked for the past three years with Réseau de Transport d’Electricité (RTE), the only power transmission system operator in France, to test and use the software in their control center. The research was previously funded by US Department of Energy and by various industry partners. Using the software to better manage oscillations will be increasingly important as renewable energy sources become common on power grids because they tend to have more oscillation issues.

When the Ukraine request came in, researchers arranged for grid measurements from several countries to be channeled to Paris and checked for oscillations, using the WSU software. In mid-March, the system operators determined that the conditions for the emergency synchronization would work, and five days later, the systems were connected, supporting Ukraine to maintain its power grid.

“This has helped to provide some peace of mind that, indeed, it didn’t cause any new problems for either Ukraine or for Europe, and that the system is working well, so that’s the contribution that we were able to make,” said Venkatasubramanian. “It is just awesome that we are able to make a difference by doing what we can to help the community and the society. Both I and my students are very, very happy.” 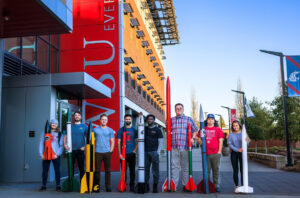