A Washington State University-led research team has received a collaborative National Science Foundation (NSF) grant to improve understanding of how contaminants, nutrients and naturally occurring minerals interact with the environment as they move downstream in a river.

The researchers, including collaborators from New Mexico State University, University of New Mexico, and the University of Illinois at Urbana-Champaign, will develop a database of river experiments around the world as they work to improve the mathematical modeling of the transport processes.

Rivers can be thought of as the kidney or liver of our planet, filtering contaminants and moving important weathered materials and nutrients, as well as contaminants through the environment, said Tim Ginn, professor in the Department of Civil and Environmental Engineering who is leading the NSF project. A wide variety of chemicals and minerals end up in river water, including runoff from agricultural fertilizers and effluent from treated wastewater that often includes remnants of common pharmaceuticals – everything from caffeine to ibuprofen. Rivers also move solutes from natural processes, such as the chemical weathering of rocks, to the ocean. As these chemicals move through river systems, they react with the environment and can have significant impacts on ecosystems.

“Rivers are becoming the point of focus of many research questions because that’s where stuff is going to the exit doors from the terra-sphere to other water bodies, lakes, larger rivers, or the ocean,” Ginn said. “They’re the great mixing bowl.”

But, researchers have not been able to do a good job of modeling the movement and transformation of those chemicals at the critical point that they’re mixing with water, air, and the top layer of river sediment. Computer models that have been developed fail to duplicate observed properties of real-life testing.

“People are having a difficult time figuring out how these chemicals pass between the river and the river sediments and back,” Ginn said.

As part of the new grant, the WSU researchers are developing a database of hundreds of experiments that have been done around the world since the 1950s that have measured how contaminants move. The tracer experiments are done by adding a dye or some other tracer to the river and measuring the dye’s appearance in the water at several points downstream.

Models have been good at predicting when the dye or contaminant will arrive downstream and where its peak amount will show up, but it turns out that important mixing and chemical transformations happen as chemicals start to disperse in the environment – at the tail end of the plume.

“To understand the eventual fate of these substances, you need to be able to characterize the reactions which require characterization of the mixing of these various waters, and the tailing is the key signature of the mixing,” Ginn said.

The WSU-led team will compile a massive database of worldwide tracer tests that will be shared with the scientific community. A preliminary effort was done in 2013, gathering about 200 studies, but the new grant will expand that database and will include physical properties of the river and its banks.

The researchers will also develop a new conceptual and mathematical model, using the database of experiments to test it. They will use machine learning algorithms to find the proper model form and to calibrate their model parameters.   They hope that their model will be able to better capture the exchange processes between the river and the sediments.

“Machine learning takes calibration to an entirely new level,” Ginn said. “This field is being completely revolutionized by machine learning.”

From biodegradation reactions to de-nitrification from agricultural runoff, nearly everything that moves through the hydrological cycles on Earth goes through river corridors, and that’s where the important transformation of these chemicals and minerals are dramatically accelerated, Ginn said.

“I’m very excited because we get to use new tools to try to understand this natural reactor,” he said. “This is not some cool little side show where we can play with math models – this is a major issue affecting a wide range of critical processes of Earth’s water system.” 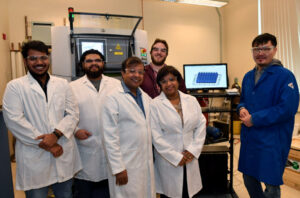