Figuring out how to keep fleas from throwing up their food could be a key to stopping the transmission of deadly diseases such as the bubonic plague.

Inside the Paul G. Allen Center for Global Health at Washington State University, Professor Viveka Vadyvaloo is exploring ways to stop the transmission of bubonic plague via flea vomit, starting by studying a glob of bacteria inside the flea’s throat.

It’s this glob of the bacteria, Yersinia pestis, held together by a sticky biofilm, that causes fleas to vomit up their blood meal back into their host, ultimately facilitating how the plague and other diseases are transmitted.

“You can imagine, you have something stuck in your throat and you try to take in some water but can’t. You will vomit all that water out, and that’s what happens to the flea,” Vadyvaloo said. “The blocked, starving flea will repeatedly bite its rodent or human host, creating more opportunities for infection by regurgitating blood containing the plague bacteria dislodged from the biofilm into the bite site.”

Plague is most known for causing “The Black Death ” in the mid-1300s in Europe and Asia that killed some 50 million people. However, the disease is also responsible for two other pandemics, most recently in the 1890s in Asia. The disease can still be found in wild rodent populations in the American West, especially in Arizona, New Mexico, and Colorado. It’s most prevalent in parts of Democratic Republic of Congo, Madagascar, Mongolia, Peru, and several other nations.

While humans rarely contract the disease, a woman in Wyoming was infected last month according to the Wyoming Department of Health.

According to research conducted in Vadyvaloo’s laboratory recently published in the American Society for Microbiology journal, mBio, a protein called CsrA is central to the production of the biofilm that causes fleas to vomit back into their host. It also stops another protein – Hfq – from shutting off that production.

“This one protein – CsrA – is able to shut off production of this other protein that usually stops the bacteria from producing this biofilm,” Vadyvaloo said.

In the laboratory, Vadyvaloo was assisted by former graduate student Amelia Silva-Rohwer, first author on the paper.

Their research shows biofilm production was significantly reduced when CsrA was absent.

“We know relatively little about how the bacterium interacts with the flea host,” Vadyvaloo said. “This puts some perspective on some of the molecular processes that are critical for this biofilm to form.”

While all forms of the plague can now be treated with antibiotics, Vadyvaloo said understanding the basic science of how the bacteria form the biofilm in the flea will allow researchers to examine solutions to reduce or end transmission for good.

“Our work could possibly lead to something as seemingly simple as a cream applied like a repellant that would prevent the biofilm from being created in the flea’s stomach, but we have a lot more to understand before that is possible,” she said. 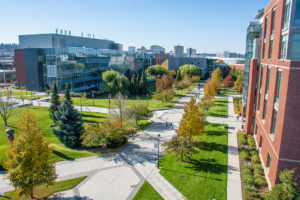