Chester squeezed through the cat door and hopped out the balcony of his owner’s Seattle home to enjoy the fresh morning air.

Just as the 5-year-old rabbit did every day.

Only this day, the 18-pound Flemish giant refused to come back inside for his customary treats.

“When he did that, I knew there was something wrong,” Chester’s owner, Julia Gibson, said. “Then I noticed he was having difficulty breathing, and he wouldn’t eat.”

A Seattle veterinarian would soon confirm Gibson’s fears, diagnosing Chester with thymoma, a tumor in the thymus, an organ that is part of the immune system and found in the chest cavity.

The good news was this form of cancer often responds well to radiation treatment. Chester’s veterinarian recommended seeking treatment at Washington State University’s Veterinary Teaching Hospital, which is one of the only facilities in the region able to offer radiation treatment for animals.

“When we found out that the thymoma he has is particularly treatable, we decided to go for it,” Gibson said.

Of course, the Gibsons would do anything for Chester – he is part of the family.

Gibson and her husband purchased Chester from a breeder after their previous rabbit had passed away. While the first rabbit was more standoffish, Chester is on the “extreme end of friendly.”

“He seeks people out. He comes out and he lies next to you, and he licks you and asks for attention,” she said. “He really likes us, like more than my cat. He’s almost like a dog in terms of how much he likes people.”

During his treatment, Chester was boarded at WSU, and he quickly became popular among the staff.

“He’s a very sweet bunny,” said Dr. Marcie Logsdon, an exotics veterinarian who led Chester’s care. “The giant breeds like him oftentimes have a dog-like personality. Bunnies are all very unique with their own personalities.”

Logsdon said she and her team frequently treat rabbits for thymomas since WSU has one of the only linear accelerators in the Northwest.

“The fact that we have a linear accelerator and we have the capability of treating exotic animals like bunnies means we have a lot of folks who travel from across the Pacific Northwest for treatment at WSU,” she said.

Logsdon said most animals are given a sedative prior to their treatment to ensure they remain still as radiation is pinpointed at the tumor. Most rabbits with thymomas undergo four or five treatments during a roughly two-week period, with each session lasting about five minutes.

“This type of tumor responds very well to radiation therapy, and they also tend to be benign, which means they don’t usually spread to other parts of the body,” Logsdon said. “We don’t get a definitive cure with this, but we can usually give about an extra year, which is pretty good when you look at the average life span of a bunny.”

Logsdon noted the WSU Veterinary Teaching Hospital is raising money to purchase a new linear accelerator, or LINAC. The new LINAC will allow for more accurate and safer treatments for animal patients with cancer. With the new machine, radiation can be better directed to the tumor while protecting surrounding healthy tissues, and because the dose rate can be better moderated, it will reduce treatment time.

Chester responded well to his treatment and is now back at home with his family and once again enjoying mornings on his balcony. Gibson is grateful for every additional day she has with Chester.

“Since he is already old for his breed, we figure if we can get six months that will be great, and if we can get more than that, that would be great too,” Gibson said. “We love him very much. We hope he has a lot more life in him.” 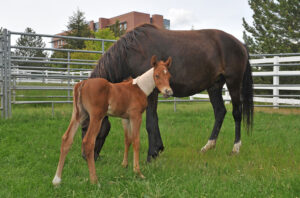 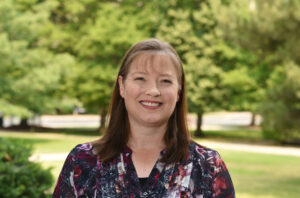