Washington State University Voiland College of Engineering and Architecture recognized outstanding students at a virtual student success ceremony on April 28.  The college’s outstanding faculty and staff have also been named and will be celebrated at an event later this year. Honored award winners include:

In addition to her bioengineering major, Hsieh, who is from Olympia, Washington, is minoring in computer science and math. She has been on the President’s Honor Roll during her time at WSU and has received numerous scholarships. She has worked as a research assistant in two labs and as a teaching assistant for Biology 107. She also serves as a peer tutor for the Math Learning Center, for Office of Undergraduate Research, and for International Programs, where she helps international students as they adjust to life in the U.S. She took second place in a regional math modeling competition with students from three states and then participated in a 100-hour international math modeling competition that included 15,000 teams from around the world. She also plays violin in WSU’s symphony orchestra. While she has not decided on her future career direction, she hopes to widen her breadth of knowledge in as many research fields as possible.

Originally from Anacortes, Washington, Rodriguez is in WSU’s Honors College and is also minoring in entrepreneurship. He is one of four engineering students chosen as a WSU Boeing Scholar. The two-year program comprised of an interdisciplinary team works to develop solutions and a business plan for a Boeing-sponsored project, culminating in a formal presentation to Boeing management and entry into the WSU Business Plan Competition. He has been involved in WSU’s RoboSub Club and the Hispanic Society of Engineers. He also participated in a foreign exchange in Valencia, Spain. He volunteered with Hearts in Motion in Guatemala installing solar panels and volunteers regularly for the Pullman Community Action Center Food Bank. Rodriguez will work as a research assistant this summer in the area of biomaterials. He eventually hopes to join a bioengineering company, continue in research, or to possibly attend medical school.

Gubsch, originally from Edgewood, Washington, is the university’s first-ever recipient of the Marshall Scholarship and the National Oceanic and Atmospheric Administration (NOAA) Ernest F. Hollings Undergraduate Scholarship. The Marshall Scholarship will support his studies next year at the University of Sheffield in England. Gubsch also received a prestigious Barry Goldwater Scholarship and was one of eight students nationwide to serve as a delegate for the American Chemical Society at the United Nations Framework Convention on Climate Change’s Conference of the Parties (COP) in Madrid, Spain. During his time at WSU, he participated in undergraduate research, including a project to build air quality sensors and to develop possible products from carbon dioxide capture. He has been involved in numerous leadership positions serving as the American Institute of Chemical Engineer’s Pacific Northwest Student Regional Conference Chair, an undergraduate peer research mentor, an Honors 198 facilitator, and as president of the Harold Frank Engineering Entrepreneurship Institute. He would like to focus his career on addressing the challenge of global climate change.

Pathirana, originally from Kandy, Sri Lanka, has been a civil engineering course instructor for Introduction to Structural Engineering and Structural Design Loads courses. She exhibits excellent mastery of the subject matter and presents material in a way that undergraduate students can understand. Her rapport with students is superb, her nominators say, and she embodies the standard of excellence expected for a phenomenal teaching assistant. Pathirana is working to complete her PhD with a focus on structural engineering and mechanics. She aspires to become a professor.

Pollock rejoined WSU as a clinical professor in Civil and Environmental Engineering in fall of 2017. He had previously been at WSU from 1997 until 2013. His teaching portfolio includes experience in structural design, structural analysis, geotechnical engineering, transportation engineering, nondestructive evaluation, and engineering fundamentals. He serves as coordinator of the undergraduate program for the department, and his nominators call him “a treasured asset” to the department. He brings to engineering education a comprehensive background including wide ranging work in academics, authorship, and practice and his experiences help him connect academic topics to real-world practice.  “He exhibits that rare combination of complete comprehension of a subject, but still manages to effectively communicate the concepts to beginning students,” wrote one of his nominators.

K.C. Wang joined WSU in 1969 and taught numerous courses in both the Electrical Engineering and Computer Science departments. After the two departments merged to become the School of Electrical Engineering and Computer Science, he continued to teach courses in computer science and computer engineering. For the past 20 years he has been teaching Systems Programming and Operating Systems and Computer Architecture courses, which are two required core courses. Wang created and developed the materials for both courses. Many of his current and former students say that they learned the true meaning of computer programming in his courses and talk about him as a “living legend” in the operating systems field. Wang developed his own operating system and has published computer science textbooks that are used at universities nationally and internationally, including at WSU. “For 51 years Dr. Wang has made invaluable contributions to the school of EECS and has greatly impacted the careers of hundreds of students,” his nominators wrote.

Since joining WSU in 2014, Doppa has established an independent, extramurally well-funded, and internationally renowned program in artificial intelligence (AI) and machine learning (ML). His research revolves around the design and development of core AI/ML techniques and their application to emerging application domains. He has presented and published consistently in prestigious conference and journals, including the Neural Information Processing Systems, the Association for the Advancement of Artificial Intelligence, and the International Joint Conference on Artificial Intelligence. These conferences are highly competitive and selective in their peer-review process. In just a few years, Doppa has received significant and diverse external funding, including grants from the National Science Foundation, including a CAREER award, the Defense Advanced Research Projects Agency, the Army Research Office, and Google. Doppa is also a recipient of the Voiland College’s 2018 Reid Miller Teaching Excellence Award.

McCloy came to WSU in 2013 after having worked in the microelectronics and defense industries for 10 years and at Pacific Northwest National Laboratory for 5 years. Since joining WSU, he has received $5 million in external research funding and has supervised more than a dozen graduate students, conducting research in the area of nuclear materials and nuclear waste management.

He has published 125 journal articles as well as a book and two book chapters. He also holds three patents. His scholarly work has been cited more than 2200 times, and he has given scientific lectures in 10 countries.

He is a fellow of the American Ceramic Society (ACERS) and a 2019 Fulbright Scholar at the University of Sheffield. He also received the ACERS Fulrath Award promoting US-Japan scientific collaboration, and as a part of this he visited various research institutions around Tokyo in 2019.

McCloy, who holds a joint appointment at PNNL, also served as director of WSU’s Materials Science and Engineering PhD program from 2017-2019. In 2020, he took over as principal investigator for research in crystal growth and is serving as interim director of the Institute for Materials Research.

As director of his laboratory, Wang emphasizes safety above everything else, his nominators say. Personnel in his laboratory receive in-depth training and are taught to keep safety issues as top of mind. The lab emphasizes not only compliance with safety policies but also being proactive in minimizing hazards and preventing accidents.

Kincaid manages a large and complex school with distributed locations on four campuses and heavy research engagement by faculty. She manages key functions of the school, including budgets, proposal submissions, travel, payroll, the faculty promotion and tenure process, administrative oversight of appointments, events planning, and numerous other operational tasks, including supervising staff. She has quickly and seamlessly learned to execute the many facets of her job, her nominators say.

Crosthwaite manages the Voiland college website, displaying the college’s image to prospective students, faculty, alumni, peer institutions, and other important stakeholders. She brings together design and coding skills, understanding of technical requirements, and awareness for clients’ needs to develop websites that display information in an engaging, informative, and easy to understand way.

Employee of the Year

As manager, Burke assures that ESIC is functioning smoothly. She is in charge of payroll, and accounts and purchasing and manages staff and time-slips in the center. She also helps with many other duties that have helped the center, from acting as industry liaison to helping out on processing of proposals. 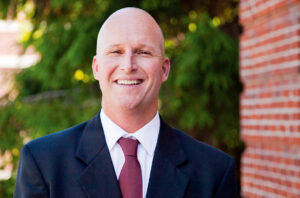