For the first time in its history, Washington State University was recognized as a top producer of Fulbright U.S. scholars.

Seven WSU faculty members received Fulbright awards for 2019-2020, giving them the opportunity to teach and conduct research abroad as part of the cultural exchange initiative.

“In a typical year, we have two or three faculty members who receive Fulbright awards,” Craig Parks, vice provost for system innovation and policy, said. “To have so many this year is a major accomplishment and is a testament to our outstanding faculty.”

The University supports the Fulbright program through the WSU Fulbright Academy, which helps faculty and students prepare competitive applications to become a Fulbright scholar. The academy also welcomes international Fulbright scholars to WSU. Visiting scholars work and study in partnership with WSU’s leading faculty as they use the University’s research facilities, exchange ideas and increase mutual understanding between countries.

Each year, the U.S. Department of State’s Bureau of Educational and Cultural Affairs (ECA) announces the top producing institutions for the Fulbright Program, the U.S. government’s flagship international educational exchange program. The list is published annually by “The Chronicle for Higher Education.”

Among the 30 public research universities that were top producers last year, the University of Washington was the only representative of the Pacific Northwest.

“We are now in very good company among institutions recognized as top producers, and having now joined this prestigious group, we need to make every effort to maintain our status by encouraging faculty to apply,” Parks said. 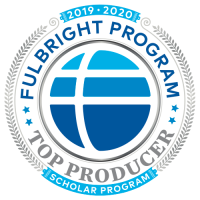 WSU would also like to be recognized as a top producer for student Fulbright U.S. Scholars in the future. Only two schools – the University of Nebraska and NYU – were recognized as top producers of both faculty and students last year.

WSU students regularly receive recognition in the form of national awards. Three STEM undergraduates this year alone received awards from the Barry Goldwater Scholarship and Excellence in Education Program, raising WSU’s total number of recipients since 1990 to 41. Kristian Gubsch – one of the Goldwater recipients – was also the first WSU student to receive a Marshall Scholarship, one of only 46 American students to receive the award.

The Fulbright Program was created to increase mutual understanding between the peoples of the United States and other countries. The primary source of funding for the Fulbright Program is an annual appropriation made by the U.S. Congress to the U.S. Department of State’s Bureau of Educational and Cultural Affairs. More than 2,200 U.S. Students and more than 900 U.S. college and university faculty and administrators are awarded Fulbright grants annually. In addition, some 4,000 Fulbright Foreign Students and Visiting Scholars come to the United States annually to study, lecture, conduct research, or teach their native language.

Since its inception in 1946, the Fulbright Program has given over 390,000 passionate and accomplished students, scholars, teachers, artists, and professionals of all backgrounds and fields the opportunity to study, teach and conduct research, exchange ideas, and contribute to finding solutions to important international problems. The global network of Fulbrighters fosters mutual understanding between the United States and partner nations, advances knowledge across communities, and improves lives around the globe.