Gary Chastagner’s family knows leaving the house during the holidays may involve an unscheduled stop.

“I can’t go anywhere without stopping by a Christmas tree lot,” said Chastagner, a WSU Extension plant pathologist and internationally recognized Christmas tree expert. “You learn so much looking at the trees where consumers buy them. And I’m really excited about helping the Christmas tree industry get the best trees possible into people’s homes.”

That excitement for holiday fir trees has permeated his research work since 1979, a year after he first came to WSU. And it has led to Chastagner winning a Lifetime Achievement Award from the National Christmas Tree Association.

“His curiosity has been such a fantastic benefit to our industry,” said Betty Malone, who owns Sunrise Tree Farm in Philomath, Ore. and who nominated Chastagner for the award.  “We need the careful investigations like Gary’s to help us make better decisions about what to plant and how to take care of our crop. His work has such range and scope that it has impacted all parts of our industry, from retailers to choose and cut operators to growers. His work encompasses genetics, post-harvest tree keepability, insects, root rots, interstate shipping, and needle problems, to name just a few of his contributions.”

Chastagner didn’t come to WSU to eventually earn the nickname “Dr. Christmas Tree”; he was hired to study ornamental bulbs (flowers) and turfgrass. But in his second year, at the behest of growers and the state legislature, his college’s dean asked him to look at a needle cast disease that threatened the holiday tree industry.

“We didn’t have much money, but it was enough to support my first graduate student. And together, with another extension plant pathologist, we developed a highly effective and economical management program in a couple of years,” Chastagner said. “That solution saved the industry a lot of headaches and money.”

A series of fortunate events

After that, circumstances and general scientific curiosity led to even more breakthroughs that helped get healthier, longer-lasting Christmas trees into people’s homes.

During the original research project, he arranged to ship trees to a colleague at UC Davis as part of a study to determine if the needle cast disease had any negative effect on the postharvest quality of trees. He noticed that two trees that shed their needles when they were shipped to California had dried out more in transit than the others. That led his lab to identify how much moisture trees could lose without being damaged. Knowing this dryness threshold, they eventually discovered that most of the drying out of trees happened on retail lots.

“Then we did a series of experiments to see how retail lots could keep the trees hydrated,” Chastagner said. “It’s amazing how this huge area of research that was far beyond disease management just opened up. And it led to major changes in how people handle Christmas trees before retail sale.”

His work has led to huge improvements for those who appreciate the fresh smell of conifers in their homes each December.

“When we started, it was unrealistic to expect trees to last more than a couple of weeks in a home,” Chastagner said. “Now some of the better types of trees can last six to eight weeks inside, if properly cared for.”

No retirement on the horizon

And he’s not slowing down, even as he reaches the age where phrases like “lifetime achievement” can be thrown around. He recently returned from a trip to the Republic of Georgia, looking for trees that have adapted to certain micro-climates and won’t be susceptible to early-season frosts.

He also works with colleagues and growers around the country, since different species grow better in different areas, to identity sources of new trees that have superior growth and postharvest characteristics that will thrive in different geographic regions.

But he doesn’t just work on the national or international scale, he also enjoys sharing his love for science and Christmas trees with his family. He and his wife fly to Arizona every Thanksgiving and he checks three small trees for his grandchildren along with his luggage.

“The climate is so dry there, I love going to tree lots and seeing if there are ways to improve the quality of trees that have to survive in 90-degree temperatures with 15 percent humidity,” he said. “Last year, I had my seven-year-old granddaughter help set up a mini-trial in my son’s back yard, cutting the base off a tree to count rings and collect data. It was so much fun, and great to get her some early science training.”

And even though he loves spending time with family, he’s not planning to retire anytime soon.

“I’ve still got a passion for this work,” Chastagner said. “It’s important, it helps people, and I get to learn something new every day. I couldn’t ask for anything else.” 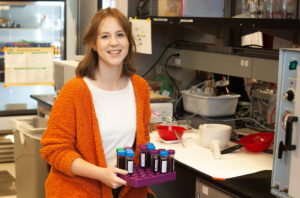