A soaring arch with a down-to-earth name connects WSU Health Sciences to its future.

But ample, under-utilized space near the bridge’s south landing is likely to be developed in coming years in ways that complements the research and scholarship taking place on the WSU Health Sciences campus.

Already, WSU has announced plans to open the Steve Gleason Institute for Neuroscience in a building there. Eastern Washington University is moving three programs and 1,000 students to the Catalyst Building being developed by Avista Development and McKinstry. Spokane County announced that it’s renovating another building to serve as a new Medical Examiner’s Office, which will have classroom space for training forensic pathologists.

Someday, the neighborhood could house cutting-edge health education facilities, biomedical research, labs, and clinical space for WSU Health Sciences, as well as spinoff ventures. Just as important to the future of the area, however, it also would include the housing, retail and services necessary to support that activity.

“That bridge means opportunity for the WSU Health Sciences campus, and for Spokane,” said WSU Health Sciences Chancellor Daryll DeWald. “We envision a health innovation district there that will change people’s lives in the region and around the globe.”

BNSF railroad tracks have long divided the eastern end of downtown Spokane between the economically disadvantaged East Central Neighborhood to the south and a rapidly growing, landlocked campus to the north.

The idea for a bridge over the tracks surfaced in the mid-1990s as a way to stimulate economic development in one of Spokane’s poorest neighborhoods. By 2013 the bridge’s essential look – a 120-foot-tall arch – was set.

It was important to planners that the bridge design be visually striking, since one goal was to create an icon and a sense of place for the east end of downtown Spokane. The result is an Instagrammable, cable-stayed span with an elongated arch. Looping ramps and a pair of polished steel sculptures complete the effect.

“It’s beauty combined with a functional connection,” said Lars Gilberts, chief executive officer of the University District, which promotes economic growth in that part of Spokane. “The bridge adds to our skyline while adding to our future.” 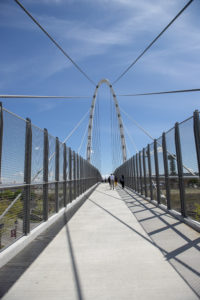 The bridge hasn’t been without its critics over the years, who quibbled with its location, the fact that it’s dedicated to non-motorized transport, and later, with its name.

But 500 people showed up for its official opening in May, cheering when speakers proclaimed it a success.

The plazas on both sides of the bridge add to Spokane’s public spaces, an effect that will become more apparent with the completion of the Catalyst project and reconfiguration of the area on the WSU Health Sciences campus.

“This bridge will be a place for people to gather, connect and share,” Gilberts said. 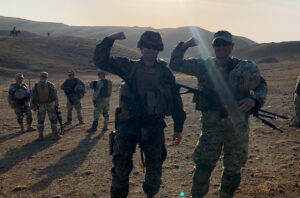