PULLMAN, Wash. – The published works of Washington State University authors will be recognized at the fifth annual “Crimson Reads: A Celebration of WSU Authors,” 1 p.m. Tuesday, March 27, in the Terrell Library atrium. Crimson Reads is part of WSU Showcase, the annual celebration of faculty, staff and student excellence.

Robert Clark, editor-in-chief of WSU Press, will discuss the development of a publishing project in a presentation titled “Hustling Hanford: From Manuscript to Book” during the Crimson Reads reception, which is open to the public.

According to Clark, WSU Press is launching a new series on the Hanford nuclear site, beginning with a four-volume collection based on oral histories. The series will also include collected papers from a symposium held in Richland, Wash., last year, a photo book and more.

Clark has worked with faculty and staff at WSU Tri-Cities, the U.S. Department of Energy, the National Park Service, the Hanford History Project and other stakeholders in the Hanford area on series development.

“My intent is to describe the acquisition editor’s job in developing a concept and working with a variety of authors to build the publishing project,” Clark said. “After planting the idea of a broadly focused collection of histories and contemporary studies, the job of WSU Press has been to move the project forward to manuscript stage and then into production. The adage about herding cats is apropos.”

A member of the Association of University Presses, WSU Press is known for its books on the American West, particularly the history, prehistory, environment, politics and culture of the greater Northwest region.

The press has published roughly 200 titles and earned recognition through such organizations as the American Library Association, the Pacific Northwest Historians Guild and the Washington State Library, as well as receiving Washington State Book Awards and Idaho Book Awards.

For more about Crimson Reads, visit http://libguides.libraries.wsu.edu/crimsonreads. Learn more about Showcase at https://showcase.wsu.edu/.

The university’s robust academic programs as well as its commitments to diversity, equity, and inclusion and student success prompted Brewick to seek out his new role. 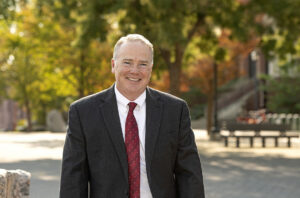 The university’s assistant vice president for federal engagement and advocacy will serve on the the Association of Public and Land‑grant Universities’ board as the representative from the Council on Government Affairs.