A new book by a Washington State University Tri‑Cities associate professor of history examines the complex relationship between religion, race, and government‑led antipoverty initiatives, and how this complex dynamic resonates in today’s political situation.

In his book, titled “Fighting to Preserve a Nation’s Soul: America’s Ecumenical War on Poverty,” Robert Bauman explores organized religion’s role in the struggle against poverty and its impact on social movements, the on‑going “War on Poverty” (initiated by President Lynden Johnson in 1964), and the power balance between church and state.

In particular, Bauman’s book showcases how activist priests and other religious leaders were able to connect religion with the antipoverty efforts of the civil rights movement. For example, the Black Manifesto, issued by civil rights and black power activist James Forman in 1969, challenged American churches and synagogues to donate resources to the Interreligious Foundation for Community Organization as reparations for those institutions’ participation in slavery and racial segregation. 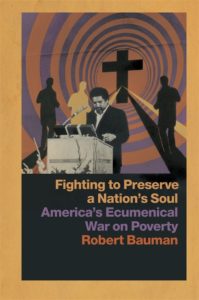 Bauman said the idea for the book initially came about after attending a conference on the War on Poverty at the University of Virginia, where many of the presentations featured religious figures who were key to local movements and efforts.

Bauman’s previous work includes the popular “Nowhere to Remember: Hanford, White Bluffs and Richland to 1943,” which examines the beginnings of the Hanford Nuclear Site, and “Race and the War on Poverty.” He also authored the Pacific Northwest Quarterly article “Jim Crow in the Tri‑Cities, 1943–1950,” which earned the Charles Gates Memorial Award from the Washington State Historical Society.

Bauman teaches American history courses at WSU Tri‑Cities, including those focusing on the civil rights movement, immigration, migration and ethnic identity and the Cold War. His research interests include race and ethnicity in the American West, and the intersection of poverty and public policy.

“Fighting to Preserve a Nation’s Soul” is available through the University of Georgia Press website, on Amazon.com and through Barnes and Noble.