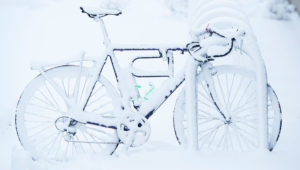 PULLMAN, Wash. – In a 1-2-3 punch, frigid temperatures in the Pacific Northwest are about to give way to another storm front and then even colder weather.

All within a span of less than a week.

The cold temperatures that barreled in on Monday are expected to plunge lower tonight, bringing near-zero temperatures to parts of Idaho and Washington, said meteorologist Nic Loyd of Washington State University’s AgWeatherNet. On Wednesday night, two major air masses may converge over the region, bringing moderate to heavy snowfall.

Then, another cold snap is predicted starting on Friday, he said.

“In terms of winter weather, this is a tough week. We haven’t seen anything like it for a long time,” said Loyd.

Tonight, cold temperatures combined with winds are expected to drive the wind chills to as low as -8 in Coeur d’Alene, Idaho, and -6 in Moses Lake and Colville, Wash., according to weather models. In Yakima – a city nicknamed the “Palm Springs of Washington” for its warmth and sun – the mercury is likely to dip close to 10 overnight.

“What we’re experiencing is a stark change from our last two winters, which were relatively mild,” Loyd said. “Low wind-chill values were barely a factor in our weather.”

The area cold blast will temper a bit starting Wednesday as low temperatures rebound into the teens and 20s. However, wintry weather is expected to tighten its grip once again as two air masses collide and settle in late Wednesday afternoon and into Thursday morning.

With a cold front descending from Canada and a warmer, precipitation-laden front barging eastward from the Pacific Ocean, the two are predicted to meet and bring several inches of snow to parts of southeast Washington and the Idaho panhandle, said Loyd.

The snow will be barely shoveled and plowed when round two of frigid temperatures takes hold Friday and into the weekend. A number of areas will see the mercury plunge even lower than during round one, Loyd explained. For example, normally mild Yakima is predicted to hit zero, he said.