Long fascinated by early civilizations, Robert Ullerich signed up for a class in ancient art and culture at Washington State University this spring expecting to gain new insights to human history but not ancient skills – surely nothing he could apply in his 21st-century life.

But just finished with his bachelor’s degree and now preparing for graduate school, Ullerich is working in construction and landscaping this summer and using what he learned in his art history course beyond aesthetics to practical matters as well.

In a hands-on lesson about the art of Coptic bookbinding, for example, he learned how ancient people stitched together sheets of papyrus to allow the pages to move while staying aligned. And, as he recently discovered, securing a 120-square-foot landscaping tarp isn’t so different from binding a six-by-nine-inch book.

Whether using silk thread or nylon rope, the stitching techniques are much the same and the measuring, knotting and tying are similar too.

“Before this, I’d probably sewn a button onto a teddy bear once,” said Ullerich, who majored in psychology and minored in fine arts. He now looks for opportunities at work and at home to practice his stitching and tying skills and enjoys teaching them to others because the outcome “is pretty sturdy,” he said.

“I love to do art and I love to teach art,” Ullerich said. Two of his first pupils were his younger brothers, whom he taught at home in Olympia, Washington, where he’s been since WSU classes went online because of the coronavirus pandemic.

This spring, Ullerich and his classmates in Hallie G. Meredith’s “Arts of Ancient Greece and Rome” course were conducting research and preparing workshops to teach Pullman and Spokane community members about ancient technology and how to create books the way early people did, including binding pages and making their own ink, styluses and paint brushes.

Meredith, a clinical assistant professor of fine arts, designed the workshops to coincide with an exhibition of artifacts from the lost Roman city of Pompeii at Spokane’s Northwest Museum of Arts and Culture (MAC), where some 500 people were expected to participate.

She applied for and won funding for the workshops from WSU’s Community Engaged Scholars Program, a partnership between the College of Arts and Sciences (CAS) and the Center for Civic Engagement; as well as the Center for Arts and Humanities; the CAS Student Career Development Fund; the fine arts department; and MAC.

“Experiential learning is an invaluable way to learn,” Meredith said. “Rather than remaining in the classroom behind closed doors, students expand their learning through hands-on research, teaching and public outreach, which benefits them and the community.”

Then COVID-19 struck and the class had to switch gears. For many under Washington’s “Stay home. Stay safe.” orders, roommates or family members became workshop participants. The students recorded and submitted their at-home lessons via computer screenshots, videos and photographs.

“They all got creative and adjusted to the situation,” Meredith said. “The results were amazing and inspiring.”

Tying it all in

Kira Edminster, a rising senior fine arts major and transfer student from Spokane Falls Community College, had no one to teach in her Pullman apartment during the initial phase of the lockdown, so she created a tutorial-style video and a vibrant infographic detailing the steps for turning charcoal into ink and a reed into a brush. She also constructed her own small book, using embroidery thread for binding, printer paper for pages, and the backs of sketch boards for covers “because that’s what I had on hand,” she said.

“Compiling what you need to make your own materials – instead of relying on mass-produced materials – and sort of working that into your art brings you closer to your own stuff in a way,” Edminster said.

“And I liked knowing that I’m doing pretty much the same thing that someone hundreds of years ago was doing. The process they used waaay back then is very similar, with different materials but the same techniques, and that helps tie it all in.” 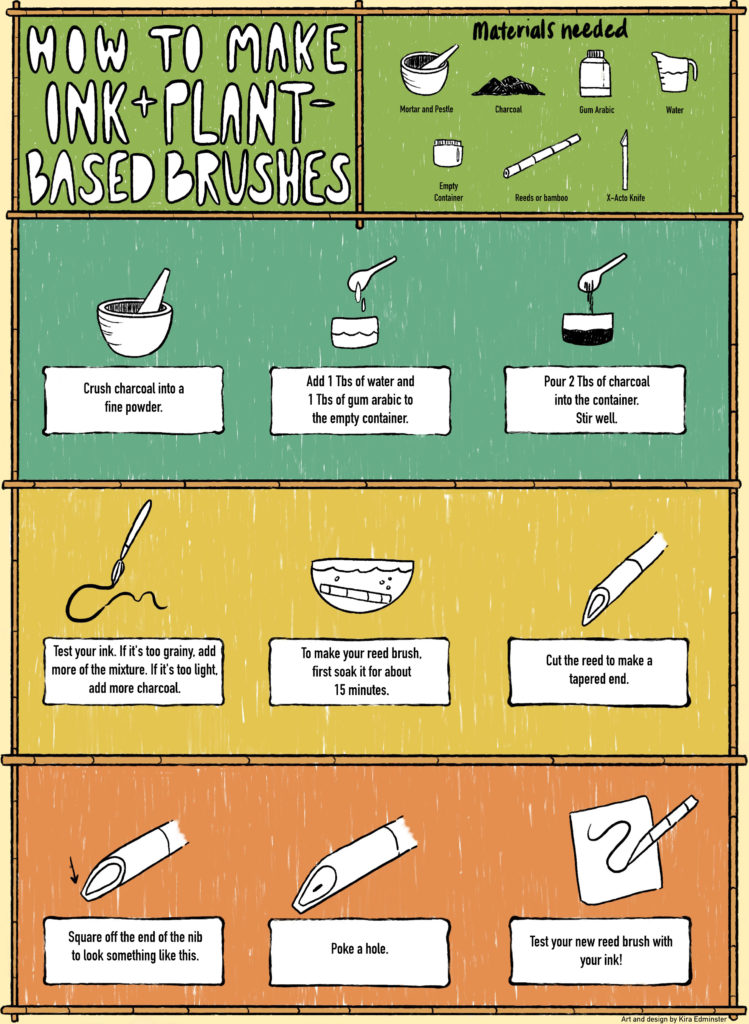 Providing students “the opportunity to look at objects and how they’re constructed and really understanding them from the point of view of makers and users,” is central to Meredith’s teaching, she said.

Most people lack primary experiential understanding of the materials and processes involved in making books and other objects, she said. “Learning about it firsthand piques their interest so they ask better questions, and they might go on to study something else that they find resonates with them.”

Meredith plans to use the videos and images her recent class created to help demonstrate the book-making process to future students and to augment community workshops she’s organizing for next spring with local elementary schools and the public library.

Gaining skills for a lifetime

To Ullerich, the low-tech, do-it-yourself aspect of hand-making a book from household items was especially satisfying, and it expanded his understanding of how ancient societies lived and valued literature.

“To really understand a culture or their history I think you have to have some kind of hands-on experience,” he said. “In pictures of Roman people, you can see them with their styluses and their books. It takes time and effort to make these things. Literature was significant in their lives.”

Participating in the workshops project also provided Ullerich some new people skills, he said. “It made me step outside of my comfort zone and gave me a chance to teach and to take a leadership role. That’s something I’ll be able to use for the rest of my life.”

A first-generation college student, Ullerich plans to study art therapy for his master’s degree program before pursuing a PhD in psychology. He hopes one day to open a psychology clinic with art therapy among its treatments and to offer free assistance to veterans with unmet needs.

“I love working in the community and helping people out – just seeing the smiles on people’s faces,” he said. “And I think it’s important to give back to the people who have given to us.”