PULLMAN, Wash. – A student team from Washington State University is in New York this week as one of 30 national finalists in NASA’s $2.5 million 3D-Printed Habitat Challenge to design an environment for Mars exploration using robotics and 3D printers.

“It’s very unreal,” said Bonnie Hollon, an undergraduate student in civil engineering. “The exposure that this gets is so much more than other types of research.”

“We’re taking it one step at a time,” said Thomas Gualtieri, a doctoral student in mechanical engineering.

From moon to Mars

Since it takes 2½ years to travel to Mars, NASA wants to send robotic manufacturing units to the Red Planet to create a livable habitat before sending humans to explore or colonize. 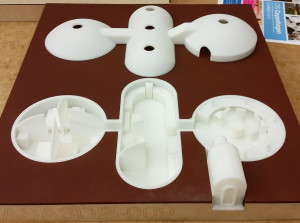 In 2010, NASA reached out to WSU professor Amit Bandyopadhyay and his research team about printing 3D objects from moon rocks. He was approached because of past work, with WSU professor Susmita Bose, on 3D printing of orthopedic implants using simulated bones.

Their 3D-printing-with-moon-rocks project was successful, and the WSU challenge entry is proposing to use similar techniques with Martian soil.

WSU’s entry will use simulated raw regolith (rocks and surface material) on Mars and a 3D printer to build the WAZZU DOME (Domed Outpost for Mars Exploration). The dome will be built not just up, but also down. Half of it will be underground.

“Domes are efficient, and we knew we wanted to build underground,” said Robertson.

The WSU team’s concept is to use a microwave generator inside the 3D-printer to melt the rocks and soil available on Mars and then use that medium in the printer to build up the dome structure piece by piece.

The idea and design involve all the fields of study offered at WSU’s Voiland College of Engineering and Architecture.

To view WSU’s entry and the other finalists in the 3D-Printed Habitat Challenge, visit http://3dpchallenge.tumblr.com/.