PULLMAN, Wash. – May 18, 2015 marks the 35th anniversary of Earth’s largest terrestrial landslide in historical times – a result of a restless volcano and a uniquely violent eruption. The top of Mount St. Helens plowed into Spirit Lake, throwing water 860 feet above lake level, a great inland tsunami.

A ground-hugging hot surge sped across valleys and ridges, killing dozens of people and nearly all other life as it leveled 234 square miles of forest. An extraordinary natural phenomenon – a vast cloud – rose 19 miles and mushroomed, plunging much of Washington state into ashen blackness darker than night as it spread eastward.

Part of a team studying volcanoes in the Cascade mountain range, Richard Waitt was one of the first U.S. Geological Survey (USGS) researchers to arrive following the mountain’s early rumblings. Not long after the devastating eruption, he met a couple who had barely outraced a searing ash cloud.

Listening to their story, he realized that people who were even fleetingly in or just outside the explosion-leveled forest observed processes that a geologist later scrutinizing deposits couldn’t know. He began interviewing other witnesses and eventually collected hundreds of stories, often making repeated visits to gather additional details, correct errors and resolve discrepancies.

‘I didn’t feel burned – until I felt my ears curl’

Two people Waitt spoke with were Jim Scymanky and Mike Hubbard. Scymanky, about 12 miles northwest, was logging a north slope above Hoffstadt Creek.

“Rocks zinged through the woods, bouncing off trees. Then the tops of trees snapped off,” he said. “It got hot right away, then scorching hot and impossible to breathe. I was being cremated. The pain was unbearable.”

Hubbard was farther out – 16 miles northwest near Green River.

“I was on my knees, my back to the hot wind,” he said. “It blew me along, lifting my rear so I was up on my hands. It was hot but I didn’t feel burned – until I felt my ears curl.”

At first Waitt sought only to document the eruption’s natural processes; but these descriptions and remarkable personal experiences seemed inextricably intertwined. 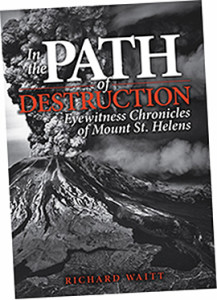 “Observations are valid to science only if place and time are known, and those elements were clarified by details of the adventure stories,” Waitt said. “Only together did they make a powerful and readable science story.”

A meticulous scientist with intimate knowledge of Mount St. Helens, he is uniquely qualified to merge an accurate chronicle of events with the related science. He has collaborated with Washington State University Press to publish a book based on those aspects, “In the Path of Destruction: Eyewitness Chronicles of Mount St. Helens.”

For decades, Richard Waitt has studied, written and spoken about geological processes – especially those related to volcanoes and the Pacific Northwest. He collaborated on and appeared in eight films, including the Discovery Channel’s “Amazing Earth,” “Mystery of the Megaflood” for PBS-NOVA, National Geographic Channel’s “Ice Age Meltdown,” and History Channel’s “How the Earth Was Made.”

He has published articles in journals such as the American Journal of Science; Alaska: Journal of Volcanology and Geothermal Research; and the Geological Society of America Bulletin. He is a contributor to several books including, “The Geology of Washington and Beyond – From Laurentia to Cascadia,” and “The High-Mountain Cryosphere – Environmental Changes and Human Risks.”

Waitt earned a Ph.D. in geological sciences from the University of Washington and a bachelor and masters of science in geology from the University of Texas at Austin. He is a fellow of the Geological Society of America and member of the American Geophysical Union. He was awarded the USGS GK Gilbert Fellowship in 1986 and the Geological Society of America Kirk Bryan Award in 1987.