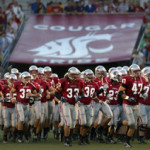 PULLMAN, Wash. – One of the most celebrated college football matchups of the year will take place in Pullman this Saturday, when the Washington State University Cougars host the University of Washington Huskies in the annual Apple Cup. This Pac-12 Conference game is set to kick off at 7:30 p.m.

In an unprecedented move, WSU will mark this year’s Apple Cup by recognizing Cougar great Steve Gleason as the sole 2014 inductee into the Washington State University Athletic Hall of Fame. A four-year letter winner in both football and baseball during his time at WSU (1995-99), Gleason was also a four-time Pacific-10 All-Academic selection for football, including first-team honors his junior and senior seasons.

Gleason went on to play in the NFL for seven seasons (2000-07), all with the New Orleans Saints. As a player he may be best remembered for blocking a punt that resulted in a touchdown in the Saints first game in New Orleans’ in nearly 21 months following the devastation of Hurricane Katrina.

Gleason was diagnosed with ALS in 2011 and since that time he and his foundation, Team Gleason, have been a global force in raising awareness and improving the lives of those affected by the disease.

As usual, the Hollingbery Fieldhouse Food Fair will be abuzz with activity Saturday starting three hours before kickoff. A number of other events will kick off at the same time, including the Cougar Kickoff at the Compton Union Building and the 2014 Apple Cup Tailgate BBQ, which will be located across Stadium Way from the Cougar statue at 1815 NE Ferdinand’s Lane.

A schedule of events and activities for the entire weekend, including times, locations, prices and reservation links, is available online at www.footballweekends.wsu.edu.

Those who plan to drive on campus are reminded that Stadium Way will be closed between NE Orchard Drive and Grimes Way three hours before kickoff until one hour after the game.

For the convenience of those who might wish to park off-campus, WSU has teamed up with Pullman Transit to establish Park and Ride locations where fans can park vehicles for free and catch a Cougar-themed Pullman Transit bus for the ride to Martin Stadium. Buses are scheduled to arrive and depart from each location at approximately 15-minute intervals. The Park and Ride lots will be opened three hours prior to each home game.

A map of Park and Ride locations is available at http://bit.ly/ZibJxZ.

Overnight RV parking permits for this weekend’s game have been sold out. Additional RV parking information is available online at http://bit.ly/1tCs3T0.

Fans should also note that Stadium Way will be closed from three hours before kickoff until 1½ hours after the end of the game. Find helpful Gameday Traffic and Travel information at http://bit.ly/1whpyHS.

For a complete list of athletic related information: www.wsucougars.com/gameday/.

Drivers are asked to exercise caution traveling to and from Pullman. See the Washington Department of Transportation website for the latest in game day driving conditions.

Fans arriving for the game Saturday should anticipate wet winter conditions with temperatures forecast to be in the mid-20s and dress appropriately.