Getting individuals who have a job-related injury or illness back to work as soon as possible was the goal of the state Safety and Health Investment Programs grant awarded to Denise Smart in the College of Nursing.

“My commitment is to workplace safety,” Smart said. “Getting someone back to work as soon as possible minimizes the disruption in their salary, their income and their livelihood.

“There are also data that show injured workers recover more quickly when they return to their place of employment,” she said.

Her team began by surveying employers who are stakeholders in the state’s Early Return to Work program, which encourages return to work options much earlier in the claims process in order to benefit everyone involved.

After getting the survey results, Smart and her colleagues – including nursing professor Melody Rasmor from WSU Vancouver – had a clear picture of what was needed.

“We wanted to change the culture and change the mindset,” Smart said. “We heard employers say, ‘We don’t have light duty work; we don’t have modified duty work. If a worker can’t come back at 100 percent, we can’t bring them back.’”

The team developed materials for employers that mapped out the early return process and outlined modified work duty that an injured worker could do before reassuming his or her former job. 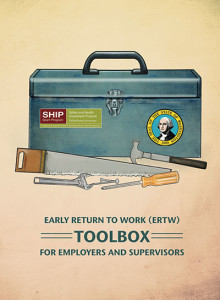 An occupational therapist and L&I expert worked with Smart to show employers how much an injured worker could do in a modified role. Sometimes, Smart said, employers didn’t know they could offer modified work roles to injured workers – or that the state offers financial incentives to employers with up to $10,000 in wage compensation.

“There are always tasks within a job that could be accommodated for an injured worker,” she said.

The team created a 35-page manual for employers about their options when an employee is injured. A DVD (with Spanish and Russian subtitles) is included; it features information for new employee orientation sessions, flowcharts explaining employer options, information about contacting health care and insurance providers and more.

Smart and Rasmor partnered with Rockwood Health System and Valley Hospital in Spokane to produce the materials for employers.