PULLMAN, Wash.—In one of Victoria Olsen-Mikitowicz’s artworks, Tyrannosaurus rex stomps across a page of the 1937 “Dispensatory of the United States of America,” once the pharmacy profession’s comprehensive guide to drugs, including those used in veterinary medicine. The book, like the subject matter, has gone the way of the dinosaurs.

“I think I am drawn to dinosaurs because they look like they shouldn’t exist, like elephants and giraffes,” she said. “The pages [of “Dispensatory”] have such a great feel and the information is so nerdy that I just couldn’t help filling them with awkward animals.”

Olsen-Mikitowicz’s work will be on display through September at the WSU Animal Health Library’s twice-yearly “Art in the Library” exhibit. Details of an artist’s reception will be announced later. 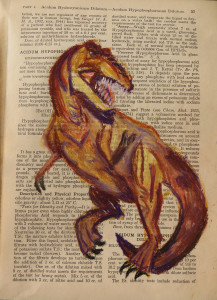 A Phoenix native, Olsen-Mikitowicz graduated from the University of Arizona in 2011 with a bachelor’s degree in veterinary science. She came to Pullman and WSU’s veterinary college because “this one had the best feel as a community,” she said.

The college has also opened up opportunities for Olsen-Mikitowicz to learn about communities on another continent. Last summer, she visited Ghana through WSU’s Paul G. Allen School for Global Animal Health to research tick-borne disease in cattle.

She also volunteered for a reading program at the Kisseman Children’s Center, where local children from the Kisseman Village in Ghana attend school. Along with introducing the youngsters to Dr. Seuss, Olsen-Mikitowicz taught them a camp song about another unlikely animal—a moose who likes to drink a lot of juice.

“It was really a wonderful experience,” she said. “The curiosity of the people towards me was really amazing, and they were so excited to show me their culture, their celebrations. To have people so willing to share their lives with a complete stranger was so welcoming.”

Olsen-Mikitowicz’s visit to Ghana also influenced her art. She painted a tribute to one of Africa’s giants, an elephant, fleshed out in orange, red, yellow and green, white tusks in sharp relief to the colors, legs dwindling to wispy brushstrokes.

“Elephants are evolution gone astray. They seem like better humans,” she said. “Parts of him look like he’s fading out, and elephants are endangered in reality.

“Africa is amazingly colorful, with vibrant personalities and vibrant passions,” she added. “I love color. Why stick to what you always see?”

Olsen-Mikitowicz returns to Africa this summer, this time in Kenya, to study the relationship between cytokines—signaling molecules that help cells communicate to each other in immune responses—and pathogens causing diseases such as malaria and East Coast fever.

The international work has spurred Olsen-Mikitowicz to pursue a veterinary medicine career with a public health focus when she graduates from WSU this spring. A visit to the U.S. Centers for Disease Control and Prevention in Atlanta last January also showed her how the CDC and other governmental agencies responsible for public health work together during an infectious disease outbreak and conduct an investigation.

“The evolving profession requires veterinarians be active in public health,” she said. “I am invested in understanding the global consequences of infectious disease and population dynamics at the human-animal interface.”

Art in the Library features animal-themed works, typically from artists with a connection to the WSU College of Veterinary Medicine. For more information, visit http://www.vetmed.wsu.edu/news/art/.

The Art in the Library selection committee is soliciting nominations for future exhibits. Those interested in displaying their art can contact Claire Miller at cmiller@vetmed.wsu.edu.