Reserved seating costs $20 for adults, $16 for seniors (60 and up) and $10 for students and youth. Discounts off adult prices are available to WSU Alumni Association members and groups of eight or more.

Tickets may be purchased in advance at TicketsWest outlets including online at http://www.ticketswest.com, by phone at 800-325-7328 and at the Beasley Coliseum ticket office, open 10 a.m.-2 p.m. Monday-Friday (closed March 17-21 for spring break). Additional fees apply to online and phone purchases.

Same-day tickets may be purchased at the Daggy Hall box office beginning two hours before the performance.

Keola Beamer (http://www.kbeamer.com/) is one of Hawaii’s premier singer-songwriters, arrangers and composers. He draws traditions and inspiration from five generations of Hawaii’s most illustrious musical family, breathing new life into slack-key guitar music while remaining true to its deeply Hawaiian roots. 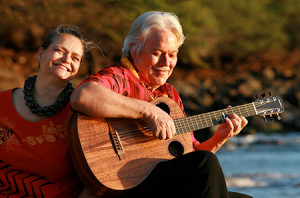 He is joined on stage by his wife, Moanalani Beamer, who began her hula training at age 4 with kumu hula (hula master) Johnny Hokoana.

In slack-key, guitar strings are tuned low. Fingerpicking techniques mimic the yodels and falsettos common in Hawaiian singing. The songs are often inspired by stories and by the tropical landscape.

Keola Beamer established himself early as a leader in contemporary Hawaiian music when he wrote the classic “Honolulu City Lights,” one of the best-selling records in Hawaiian music history. An award-winning singer-songwriter, he was featured on the soundtrack for the George Clooney film, “The Descendants,” and released the album “Malama Ko Aloha,” both of which received Grammy nominations in 2013.